If you are looking for a short walk with some lovely views over the river estuary and the hills beyond, this is a nice one.  If you want to go all the way to Picnic Island, a walk of just 30 minutes or so, you will need to be prepared to pick your way along some jagged rocks, but if you only want to go as far as the beach beneath the footbridge over the railway line, it’s a simple walk along well worn paths.  You can also turn it into a much longer 6 mile walk by crossing the footbridge and going up the hill and circling back into Aberdovey. I’ve added a PDF at the end of this post.  Patches can be a bit muddy after rainfall and on the rock this can be slippery, so suitable footwear is recommended.  Before you set out, check the tides.  You will need to avoid high tide, because part of the walk is cut off by water.  If you do find yourself returning along the path to meet with an unpassable section you will need to cross the bridge over the railway and return along the road, but this is a busy road with no footpath so is much best avoided.

The walk is all about beautiful views over the estuaries and to the hills beyond.  It starts in the Memorial Park at Penhelig.  Either go under the railway bridge or cut off that rather dangerous corner on the road by taking the private road in front of the houses known as Penhelig Terrace.  The Memorial Park is on the other side.  It is a lovely little park with great views over Aberdovey’s sea front.  It contains a memorial and a plaque in English and Welsh to mark the achievements of the 3 Troop 10, a group of German nationals who worked on behalf of the Allies during the Second World War, and who were stationed in Aberdovey for their training (which I have described on an earlier post).  There is also a little shelter, slightly unkempt at the time of writing, to the memory of Mr Richard Roberts “in recognition of his munificent gift for improvements at Aberdovey 1930.”

At the far end of the park let yourself through the gate and onto the Roman road.  The so-called Roman road is neither Roman nor, in modern terms, a road.  It is a path carved out of the local mudstone, a remarkable feat that even the Romans, accomplished civil engineers, would have found a difficult task without the help of explosives.  And why would they have gone to the trouble?  The nearest Roman military structure was Cefn Caer at Pennal, 11km to the east along the Dyfi.  There is no obvious benefit for a permanent stone-built pathway to Aberdovey, even if there was any sign elsewhere between Aberdovey and Pennal of a long-term Roman presence, which there isn’t.  My guess was that it was built in the 1860s, part of the works for the building of the railway, but again that fails to address the question of the purpose of such a track, given that there was a perfectly good coast road at that time.  In his description of the 6-mile walk, below, the author David Roberts, an Aberdovey resident, states that the track was built in 1808 for horse and carriage, but he doesn’t say where these were headed and why such a road would be required.  Even Hugh M. Lewis, who was born in 1910, and grew up and lived in Aberdovey was unable to shed any more light on the subject. 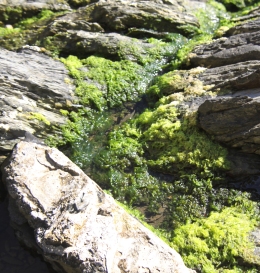 Whenever it was built and whatever it was used for, it is invaluable today as a ready-made footpath for walkers.  The path has two small bridges that cross little natural outlets for fresh water that pours down the hill into the estuary.  In these places the fresh water-loving gut weed grows, a livid, bright green that contrasts dramatically with the black stone and the brown seaweeds.  The estuary is incredibly peaceful on a sunny day as the tide retreats, the waters flat and sparkling, making a pleasant sound lapping gently at the rocks as they travel at a considerable pace to the west. The hills beyond, in Cerdigion, fresh and green, are the perfect backdrop.

The ubiquitous mudstone, into which the path is carved, slopes gently down into the waters, and is covered with some of the seaweeds that I described on my strandline walk, fascinatingly three types forming three bands as they approach the water, with those most equipped to survive out of the water for longest at the top, and the least drought tolerant at the bottom.  Sea oak is at the top, bladder wrack in the middle and egg wrack at the base. some of it remaining submerged even at low tide.  Unlike my strandline walk, where all the seaweeds had been detached from their rock bases, it was possible to inspect the seaweeds in situ, so I could see the holdfast with which they attach themselves to rocks, a surprisingly tiny little mass of highly tenacious material.

On the rock face above the level of the path, two plants in particular make the best of the most implausible nooks and crannies to grow: red valerian and sea thrift.  Both are drought resistant, saline tolerant, prefer sandy and low-fertility soils and need full sun, so are frequently found in south-facing coastal areas.  When the sea thrift goes over, which most of them have by late September, the fallen petals leave attractive skeletal globes. Watch out for sea thrift and red valerian in cracks in vertical planes of the rock to the left as you walk towards Picnic Island.  Where the rock splits it reveals trapped minerals that are often beautifully coloured providing a perfect canvas for the flowers.

At all levels above the waterline are a variety of lichens dominated by yellow scales (shown to the right), which is prolific, followed by black shields and map lichen.  Lichens are not single organisms but are symbiotic, depending for their survival on “photobionts” (algae and/or cyanobacteria), which provide them with the carbon that they need.  The photobionts use the process of photosynthesis to manufacture their own food source, whereas the fungal component of the lichens need an external food source.  This ecological strategy has obvious benefits for the fungus, which is essentially parasitic on the photobionts, but it is thought that the photobionts might benefit too, due to the provision by the fungus of a stable environment in which they can develop.  There’s a lot more information on the British Lichen Society website.

The Roman road runs out and is replaced by a well maintained footpath that runs parallel to the railway line, taking a route several feet above the estuary, again with wonderful views across the estuary.  At low tide the sands in the middle of the estuary are revealed, a shifting chiaroscuro of colours and deep shadows framed by the speeding waters of the retreating tide.  There is rich vegetation along the footpath – blackberry and rose brambles, ferns, berberis, purple thistles, red valerian, buddleia, holly, wild oregano and much more.   In autumn there are few flowers, mainly the last of the red valerian, but there is a profusion of red and orange berries.

A fork in the path offers a choice.  The left fork leads up to Picnic Island and the footbridge over the railway into a lay-by and, 100m down the road, the continuation of the walk for those who want to pursue the 6 mile option.  Picnic Island is not an island, just a small promontory cut off from the hillside by the railway, but it has wooden seating and is a pleasant green area with excellent views south over the estuary.  It’s original name is Bryn Lestair (obstruction hill).

The right fork leads down steps to a small pebble beach, and the continuation of the Roman road for a short span, before it runs out again.  The beach was the site of a shipbuilding business, some of its walls still surviving, but the site was largely destroyed by the railway.  From the beach, facing the sea look left and you will see that the Roman road resumes.  Follow this for a short distance and then it’s a matter of picking your way down the rocks to the beach, and along the foot of the retaining wall behind which the railway runs.  This is invariably wet, with hillside water pouring from under the wall.  There were almost no shells on the beach sections, only very fragmented muscles and barnacles.  The barnacles were on loose bits of slate, so they were probably detached from rocks elsewhere and brought in on the tide.  This is probably because the waters are brackish, combining freshwater pouring out of the river Dovey and salt water coming in on the tide. 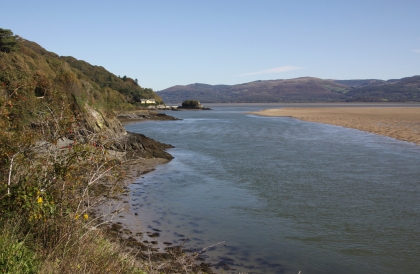 On the other side of this small beach is another promontory with views over the estuary and east towards the Georgian Trefri Hall with its own island complete with crenellated folly.  Before it was painted mustard yellow it was my favourite house in the area – that wonderful location, those stunning views, a private tidal beach and that super folly!  In 2016 it came on the market and was featured in an article on the Wales Online website – for sale for a cool 1.7 million pounds.  Rather more than I had in my piggy bank on the day.

The walk back into Aberdovey is simply a matter of retracing your footsteps.

If you are interested in the 6-mile walk that takes you up into the hill behind the estuary, here’s a PDF to download:  6 mile circular walk Picnic Island and hill.  It is the BBC Weatherman Walking map and guide by local resident David Roberts (eight pages with photographs).  I haven’t done it yet, but it looks splendid and it’s on my to-do list.