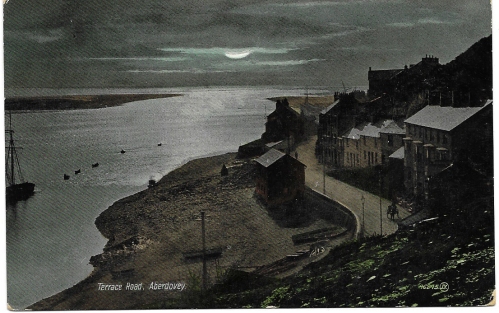 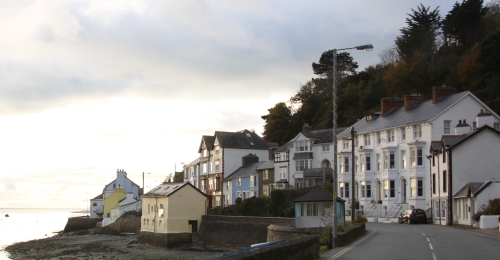 I love this postcard.  It shows Terrace Road in Aberdovey by moonlight, with a slightly overcast sky, the silver sheen reflecting off slate roofs and casting a bright glow over the estuary.  The most prominent building in the picture is the little structure on the beach, a purpose-built lifeboat house to provide a home for the village’s first lifeboat, Victoria, in 1837 and now called Traeth Dyfi (Dovey Beach), it had an entrance for the lifeboat under the west gable and a pedestrian entrance opening out on to the road. Victoria was replaced with two newer and bigger vessels in 1856 and 1865, each kept in the same building, but it went out of use as a lifeboat house when a bigger lifeboat was needed in 1886.  A slipway, which does not appear in the above postcard, was added on this side of the old lifeboat house in 1903 and can still be seen today, although the lifeboat now has its own dedicated building that it shares with the yacht club near the jetty. After the lifeboat moved, Traeth Dfyi became a cake shop and tea room and in the 1960s was converted for residential use.  It is currently available as a holiday let, with pictures on the website of the modern interior, and a history of the building (from which most of the above details are taken) for those interested in more information.  The building seen as a silhouette in side view in the postcard and, in the photograph, as a white-painted building beyond the old lifeboat house is the three-storey Georgian house Plas Dyfi, which is currently for sale.

The above photograph shows the view as it is today, taken on 17th November 2019.  It attempts to reproduce the viewpoint but I couldn’t get the elevation.  The picture was clearly taken from the hillside.  The yellow building on the beach is the old lifeboat house, and the four-bay white house to the right is Cliffside. 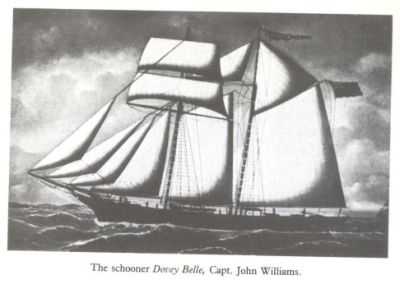 Cliffside is also at the far right of the postcard, a terrace of four very fine four-storey houses.  Before the construction of Cliffside, in the mid 1880s, the site was the site of a lime kiln, employed to turn imported limestone into powder for spreading on lime-starved land.  In 1901 no.2 Cliffside was home to Master Mariner Captain John Williams (1865-1937).  Captain Williams was born in Aberdovey and had served on his father’s ship, eventually becoming Master of the Aberdovey-built Dovey Belle.  He had lived at No.35 Copper Hill Street in 1900 when he was aged 35, but in c.1901 seems to have moved to Cliffside. He became Master of the schooner 1867 Aberdovey-built topsail schooner Dovey Belle, built by Thomas Richards at Aberdovey registered No. 9 in 1867 at Aberystwyth.  According to the well-researched Williams Family Tree website “she became the last locally built sailing vessel to ply to and from Aberdovey on a regular basis.”  No.4 Cliffside was the home of Hugh M. Lewis M.B.E., who lived his entire life in Aberdovey, wrote several memoirs of the village and was awarded an M.B.E in 1993 for his service to the community. 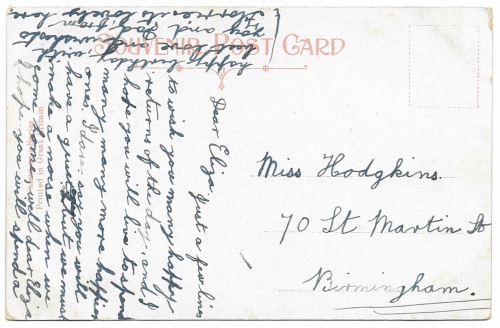 There’s no stamp or postage mark, even though there is a message and a Birmingham address, apparently ready for posting.  It was sent in lieu of a birthday card, and I hope it brought a lot of pleasure to the recipient, Miss Eliza Hodgkins, if she ever received it.  Out of curiosity I looked up the postal address but although St Martin’s Road still exist, half the road is a building site and the other half is dominated by a huge multi-screen cinema and other modern block-like structures.

I can’t read the print under the handwriting.  There is a code on the front of the card, (46845 J.V.), which could indicate that this was manufactured by James Valentine.  If so, the Valentine postcard dating page on the Historic Coventry website puts that code at 1905.  In the picture masted ships are shown just round the corner, there is gas lighting (installed in 1868; electricity was not installed until 1945) and a horse pulls a small cart.  These are all consistent with 1905 being a plausible date but the design and colour printing on the back seem more modern.  It is possible that a newer printing run used an older image.  It would be good to get an idea of a possible date range from other postmark or  from other cards, so I’ll keep an eye open.

2 thoughts on “Vintage postcards #5: Terrace Road in the moonlight”