This postcard was purchased with the job lot that started the vintage postcard series, but for some reason it did not get published with the rest, and I found it whilst putting the entire collection away for safe keeping.  It is interesting, capturing echoes of the small-scale fishing industry.  The postmark has a date of 1917, which means that the photograph was taken before that time.  It shows the lovely four-terrace white building Cliffside that still stands, beautifully maintained.  This side of it, nearest to where the photographer stood, is a low building with a tall chimney at the back.  Does anyone know what the building with the chimney was for?  I’ve been through Hugh M. Lewis books, but I cannot find a mention of anything that would explain the chimney in that location.

All of the buildings adjoining Cliffside are still in situ, but the chimney has gone.   The dominating feature of the photograph is the rickety looking arrangement of poles that run along the beach, for the drying of fishing nets.   There is also a really rather nice little open-top carriage on the road, minus horse.

Above is the same sort of angle today.  The fishing net frames were built where the concrete platform now stands.  The concrete monster puzzled the life out of me for years, but I was told recently that Aberdovey used to have extensive mussel beds, and this platform was used for processing them.  Indeed, it lies next to the foundations of an earlier platform.  It fell out of use when the mussel beds shifted elsewhere.  I do wish that someone would knock it down, as it’s a real eyesore!

In the image below I have superimposed the photograph over the postcard and reduced the opacity of the photograph so that if you look very hard (and it does make your eyes go a bit funny), you can see both the fishing net frames and the mussel sorting platform.   The bus stop has changed the line of the wall, but the slipway is still in situ and the houses have changed only very little. 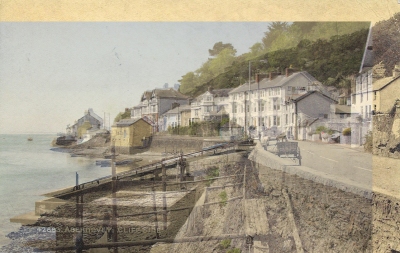 Not many postcards include a sender address, but this one does, and there’s a neat little cross written on the left of the postcard to show where it is located:  C/O Mrs Richards, Aberdovey Cottage, Bath Place, Aberdovey, Wales.  I think that this is probably now 3-4 Bath Place, known as Dovey Cottage (just east of the Literary Institute).

The postcard was sent without a stamp, and there is a pencil-written note saying “Unpaid.”  Presumably the Ashton Under Lyne recipient, Miss Bishop, had to pay an excess fee.

The card, number 42883, was in the Sepiatone series, produced by Photocrom Co.Ltd.  of London and Tunbridge Wells.