The following information has been assembled from books and booklets by Hugh M. Lewis M.B.E.  Aberdovey inhabitants and visitors are very lucky to have his recollections, and his investigations into village history, captured in a number of small publications.  Having been born in 1910 he grew up in the village and became a repository of information about the village both during his own lifetime and before it.   Without his work, it would be very difficult to get a clear view of how Aberdovey developed during the late 19th and the 20th Centuries.

The arrival of such things as running water, gas and electricity were important to a village that had ambitions to develop its tourist industry.  The gasworks, finally up and running in 1868-9, followed fast on the heals of the arrival of the railway, and villagers must have felt that modern living really had arrived. 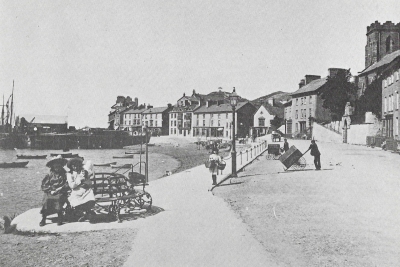 The promenade with a gas light on the corner, sometime after 1900. Source: Aberdyfi: A Glimpse of the Past by Hugh M. Lewis.

In 1864 the Tywyn Board of Health approved an application to build a gasworks near Trefeddian Terrace, to consist of a large gas holder, a tall chimney and a manager’s house.  Work began on the gasworks, but the work was not completed and in 1865 attempts were made to sell them.  It was not until 1868 that the Aberdyfi Gasworks were acquired by the Tywyn Gas Company, and gas was fed from the Tywyn Gasworks in underground pipes, which allowed for the provision of gas lighting and the connection of some houses.  The gas holder in Aberdovey was used for storage and the tall chimney that accompanied it was knocked down.  The lamps were lit manually by a lamplighter, who used a long pole to reach them.  Hugh M. Lewis says that that the street lamps were quite far apart “leaving pockets of darkness in between haloes of light, the weak glare of cottage candles, the beam of an occasional torch, glow of a hurricane lantern or yellow light of a carbide bicycle lamp.”  The lamplighter was first replaced by a pilot light and a timer, and eventually gaslights were replaced by electric street lights. 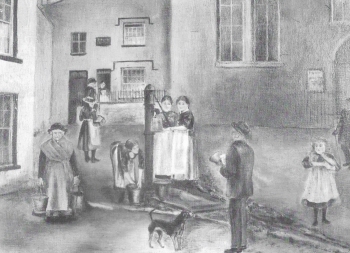 The Aberdovey village pump, with the bakery and Wesleyan chapel behind. Source: Aberdyfi – The Past Recalled, by Hugh M. Lewis.

It is interesting that gas arrived in Aberdovey thirty years before most houses had permanent running water, with many households remaining dependent on the village pump.   New houses were going up quickly as mining, shipbuilding and trading activities expanded, and the village pump became increasingly impractical.  In 1898 a rectangular reservoir with a capacity of 3 million gallons was built in the hills beyond the village near Crychnant Farm, and water mains were laid in the village, to which homes were then connected.  By 1901 there were 310 houses and the population stood at 1358  people, so the reservoir had a lot of residents to supply.  Hugh M. Lewis (1910-2003) says that even during his own childhood, the water supply often ran out during the summer.  He says that local children could earn “the odd halfpenny” by carrying buckets of water to houses at some distance from the pump.

A photograph showing a formally arranged gathering next to the village pump. I suspect that the above painting was actually derived from this photograph.  Source: Aberdyfi – Portrait of a Village by Hugh M. Lewis

The reservoir above the village, with a capacity of 3 million gallons. Source: Aberdyfi – A Chronicle Through Time by Hugh M. Lewis 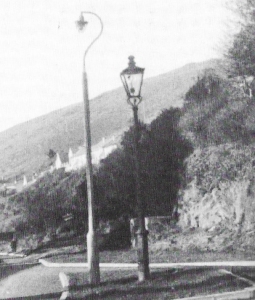 The old gas lamp and the modern electric street light, side by side at the bottom of Gwelfor Road. Source: Aberdyfi – The Past Recalled, by Hugh M. Lewis

Electricity is one of those household facilities that one takes very much for granted, but Aberdovey remained without an electricity supply until 1945.   A company was formed, with shares offered at a pound each to raise capital of £13,000.  A combination of water and oil power were used to generate electricity.  Originally it was thought that water-powered turbines would be sufficient, and water was sourced from Caethle steam near the disused lead mines in Happy Valley.  The demand, however, outstripped the supply and water power was supplemented by oil.

After the Second World War, Aberdovey settled into a very different pattern of social and economic activity from its more industrial past.  The copper, iron and lead industries had come to an end, shipbuilding had ended with the arrival of the railways, and Aberdovey retained only a minor role as a port.  Instead, the tourist trade, which had taken off in the 1860s, became the mainstay of the village economy, and for this, the provision of running water, gas and electricity had become essential.

The information and images used in this post were sourced from two books by Hugh M. Lewis:

1 thought on “The arrival of gas, running water and electricity in Aberdovey 1865-1945”