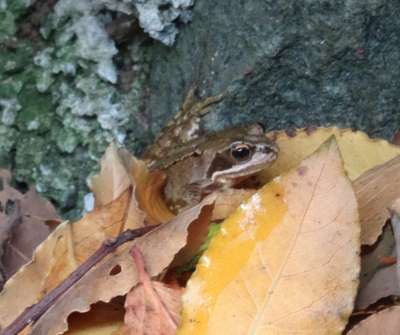 The frog under my bay tree.

Not much sun today but warm and dry.  Got quite a bit done.  The former gardener’s last strimming of the grass resulted in a hayfield and I could bear it no longer so found a fan-rake in the garage and raked it and all the fallen leaves into piles ready for placing in my garden bin.  Looks SO much better.  I disturbed a frog under the giant bay tree.  I couldn’t believe it at first, because what on earth would a frog be doing living half way up a steep hill?  Not a natural place for the accumulation of a water source.  I stopped raking near him/her because it was clearly causing anxiety, and instead whipped out my pocket camera and took a photo.   A pretty little thing and I do hope that it finds its way to a water source eventually.  As I saw a dragonfly later in the day, I assume that someone around here must have a large garden pond.