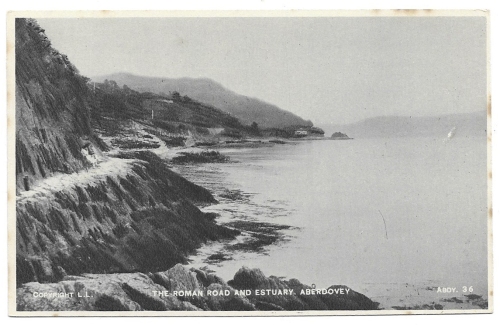 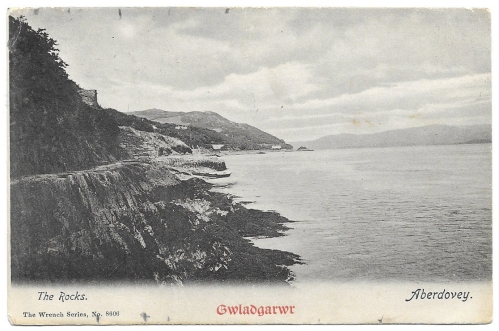 The Roman Road as it is today from a similar viewpoint to the first postcard, with Trefri in the background

The Roman Road is a nice local myth.  It forms part of a popular low-tide walk along the estuary to Picnic Island (which I have written about here) and is a truly remarkable sight, cut out of the black Aberystwyth series shales, which in places are so smooth that the rock looks polished and glistens in the sun.

Although there is a Roman fortlet at Pennal 11km away, there are very few indications that the Romans did anything more than pass through Aberdovey, if they even did that.  Trying to find out what it was built for I first looked to Hugh M. Lewis, who wrote several histories of the village, but he was unable to shed any light on the subject.  My original guess was that it was built in the 1860s, part of the works for the building of the railway, but that failed to address the question of the purpose of such a track.  In his description of a 6-mile walk that incorporates the road, the author David Roberts, an Aberdovey resident, states that the track was built in 1808 for horse and carriage, but he doesn’t expand on this observation.  I then found a publication by the Gwynedd Archaeological Trust (GAT Ports and Harbours of Gwynedd, 2007) that contains the following statement, and which appears to confrim what David Roberts says and provides sources for identifying this as a road designed to connect to a stretch of road that already linked Pennal to Machynlleth:

Fenton remarks in 1808 that a new road was under construction from Aberdyfi to Machynlleth but implies that the section from Pennal to Machynlleth was already in being, that an extension west and north to Tywyn ‘by way of the sands’ was contemplated if not actually under construction. This road, known as ‘hen ffordd Corbet’ was not a success, being built so low that it was frequently covered by the tides. Its course is marked on the plans for the replacement road dated 1823 and prepared by Thomas Penson (DRO: Z/CD/168).  This is probably Thomas Penson junior (1790-1859), county surveyor of Montgomeryshire, a versatile and able architect-engineer, rather than his father. Lewis states that this road was completed in 1827

I am still unsure if this is the correct answer, as the track barely seems wide enough for horse-drawn vehicles, and in places would have been lethal underfoot for horses.  One would need to see Penson’s plans for the replacement road mentioned by the Gwynedd Archaeological Trust’s report.  Whatever its original purpose, it is invaluable today as a ready-made footpath for walkers.  The note about the road being unpopular due to being submerged by tides holds true today.  The walk is impossible without wading through water at high tide.  I note that the second of the two postcards does not commit itself on the subject and states merely that the scene shows “The Rocks.”

The first postcard was unused, so there are no helpful postmark or stamp details to give an indication of date.  It was manufactured by Lilywhite Ltd of Triangle, Halifax.  Lilywhite was set up by Arthur Frederick Sergeant (1882-1952) in around 1910 and produced postcards at least until 1931 when their factory burned down, destroying both prints and negatives.  They took over Arrow Series Postcards in the 1920s and as well as retaining the Arrow name for some of their postcards, re-released some earlier Arrow postcards under the Lilywhite name.  I’ll keep an eye open for a used version of this postcard to see if I can find a date or at least a date range.

The second postcard has a Edward VII stamp and an Aberdovey postmark dated August 7th 1904.  Edward VII reigned from 1902-1910, and this particular shade of blue-green was issued between 1902 and 1904. 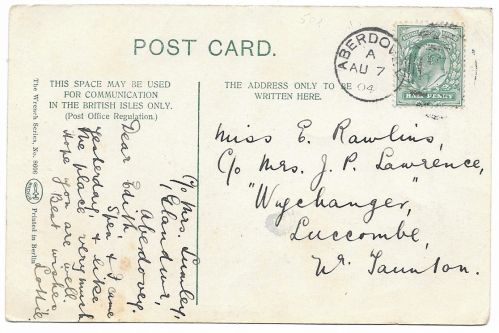 I loved the brevity of the message, which also contained the brilliant information that the sender had been staying at Glandwyr in Aberdovey. 115 years later it is owned by a very nice local holiday company, Dyfi Cottages, that lets out properties in the village and also runs the Visit Aberdovey Facebook page.  There’s a lovely sense of continuity in those details.  I suppose that postcards were, and still are, a form of social media, a way of maintaining communication with people far away.  The postcard was sent to the beautiful village of Luccombe, which now lies in Exmoor National Park in Somerset.  The house to which it was sent, Wychanger, was a manor house now Grade 2 listed and converted to semi-detached homes.  It is fun to have the full breadcrumb trail.

The 1902 Post Office regulations are provided as simple instructions on each half of the back of the card, leaving no room for any confusion!  The title Gwladgarwr at the front of the card is a puzzle, appearing on a lot of Wrench’s Welsh postcards.  It means “patriot” and was the title of a Welsh language newspaper (Yr Gwladgarwr), but the newspaper appears to have no connection with the postcard manufacturer.  The card is in the Wrench Series, no.8006, and was printed in Berlin.

Sir John Evelyn Leslie Wrench (1882-1966) was a British author and journalist.  While in Germany after leaving school, Wrench was impressed with the popularity and high quality of German postcards and decided to shelve his plans to become a dimplomat and instead set up a British business producing high quality postcards in sepia, black and white, and colour.  He had his resort postcards printed in Dresden (Saxony) and Berlin from where they were shipped in bulk to London.  Although it remained in business for only a few years, the postcard company was a initially a phenomenal success and Wrench himself became something of a media darling.  Based in Haymarket in London Wrench’s postcard company had over 100 employees and sold in the region of 50 million cards, all before he had reached 21 years of age.  Wrench went out of business in 1904, having sunk too much capital into the company, leaving him unable to repay loans but he went on to have a very successful career.  He was founder of the Royal Over-Seas League, became editor of The Spectator and was knighted by George V in 1932.