Although the postcard is entitled Aberdovey from the Island, I assume that this was taken from Ynyslas rather than a sandbank, because the tide is pretty high. Ynys means island, so perhaps that is the source of the postcard’s title.  It’s another gorgeous photograph. That single sail Aberdovey to Ynyslas ferry boat is a think of real beauty, and the placement of fractionally off-centre is sheer genius.

The following two were taken in February 2019 from the beach at Ynyslas.  Although today there are some more buildings visible on the hill, it is actually surprising how few new additions have been built.  The 1960s developments at the top of Copper Hill Street were a commercial decision and were probably good for Aberdovey’s future, as was the car park on the sea front, but it is notable that development has, for the most part, been kept under control.

The postmark is dated 26th August 1915, and was sent from Aberdovey.  The stamp shows George V (who reigned 1911 – 1936) and is known as a “½d Green,” first issued on 1st January 1912.  A frustration is that the postcard manufacturer is Gwilym Williams, and I have been unable to find out anything about him.  Do let me know if you have any information.

Another frustration is that the handwriting is, for me, almost completely undecipherable.  In the address, the first line appears to be Chetwynd but the town/village took me ages to work out (it’s West Malvern) and the message eludes me completely.  I suppose that as I (and presumably others) have become more dependent upon email and word processors, deciphering handwriting is much less of an everyday task. 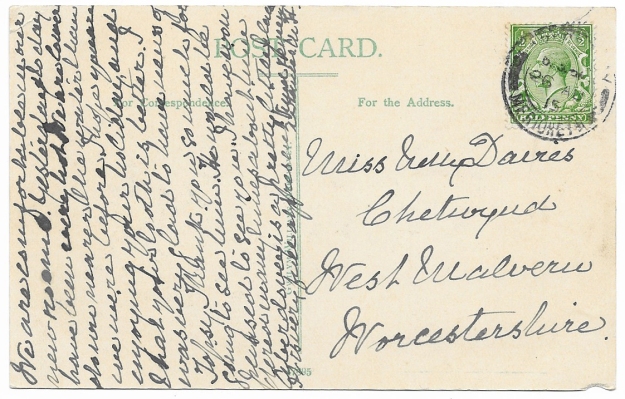 This appears to be the house to which the postcard was sent:

1 thought on “Vintage Postcard #10: Aberdovey from the Island”