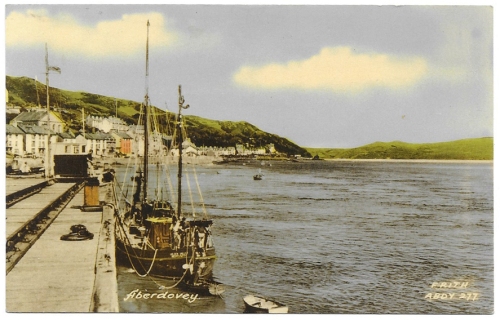 I couldn’t find out much about this tinted postcard because it is not listed in the Frith database.  However, it is the old 1885 jetty (the new one was installed in 1970) and retains the railway tracks that were used to move cargo to and from ships (there is more about the jetty and wharf in a previous post).  The colours aim to be realistic, but do not disguise that this was originally a black and white photograph.  The card is unused and I haven’t found a date for this postcard yet.

Thanks to Sierd Jan Tuinstra for the information that the ship moored up to the jetty is the 45ft Outward Bound boat Golden Valley (LH37), ordered by George Jarron of Port Seton.  She was built by James Martin and Son, a Granton shipyard, launched in 1949 and registered in Aberystwyth.  Granton, at the mouth of the Firth of Forth, on the south bank at the far north of Edinburgh, was a major fishing base, and had two principal boat builders during the 1940s, of which James Martin and Son was one.  The company, originally specializing in joinery, until asked by the Admiralty to built a Motor Fishing Vessel for use during the Second World War.  Subsequently they built eleven wooden Motor Fishing Vessels (M.F.V.s) for the Admiralty between 1941 and 1945, designed initially for harbour and coastal work but ultimately intended to be converted to fishing boats after the war.  After the war, during which large numbers of fishing vessels had ben lost, the company continued to build fishing boats for the herring industry.  Golden Valley was one of the last vessels to be built by the company.  It was originally fitted with a 120 h.p. Crossley engine, but triplex chain breakages caused a series of gearbox problems. This was sorted when another vessel, Mizpah, was provided with a new engine and its old tooth and pinion gearbox was fitted to Golden Valley. (Information about Golden Valley sourced from the Granton Built Fishing Boat website). From accounts on the Alumni section of the Outward Bound website, Golden Valley seems to have been acquired by Outward Bound in the early 1950s.

There is information about the Frith Series postcards and the fascinating history of the company on my post about a previous vintage postcard at https://aberdoveylondoner.com/2019/12/01/vintage-postcards-9-dysynni-valley-and-bird-rock/.