On my travels today I was lucky enough to see some remarkable weather.  Things started out with a sky so blue and a sun so yellow that the colours seemed almost fantasy-land.  The grass was white-topped and scrunched under foot when I left the house, and the air was so cold that it froze my breath.   It was a challenge, after turning right at Bryncrug and heading towards Tal y Llyn, to keep my eyes on the road, because the scenery was so glorious as it emerged from its icy white lace.  Tal y Llyn itself was simply spectacular, mirroring the sun-lit south-facing slopes in a near-perfect reflection.  At this time of year the contrast between sunny colours and black shadows is dramatic. 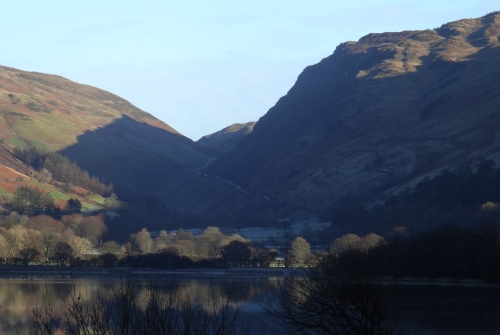 As I approached Llanuwchllyn, which sits at the foot of Llyn Tegid (Lake Bala) and according to the Visit Bala website means “Church at the top of the lake,” there were fascinating horizontal bands of cloud sitting above the ground and beneath the hilltops.  On the south-facing slopes these were against bright hillside colours and blue skies.  On the north-facing slopes they sat above trees and fields still spiked with frost, the sun so bright that the sky seemed silver against the darkness of the hills.  My lovely Canon digital SLR (known for reasons lost in the mists of time as Josephine The Second) turned out to be impossible to get to in a hurry, so I used the little Sony that I keep in my handbag.  It struggled desperately with some of the lighting conditions, but I have posted the photos anyway because they do capture something of the magic. 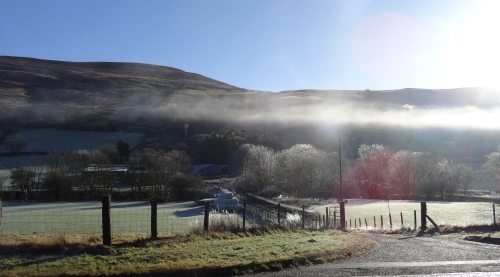 These strands of white mist presaged, to my surprise and dismay, a tediously dreary fog.  Ahead of me a car was just a ghostly shape, and beyond that any other vehicles were a mere suggestion.  The lake was invisible.  I had been expecting to stop and take photographs of another beautiful mirror image, another spectacular vista, but beyond the road that runs along its north bank there was nothing but a dense veil of unvarying, damp, impenetrable murk.  In the picture below, where I pulled the car over, I am standing at the water’s edge.  Normally the lake would stretch out as far as the eye can see, contained within a sloping valley, very beautiful.  Today even the seagull floating only a few feet away from me was seriously blurred and ill-defined.

When I quite suddenly re-emerged into the sunshine, the impact was rather like stepping off an air-conditioned plane onto the top of the mobile steps in a very hot country – a moment of pure sensation and a blissful sense of mild disorientation and very pleasurable surprise.