Aberdovey is at its glorious best on a day like this – blue skies, sunshine, turquoise seas, delicious warmth and almost no-one around to disturb the peace.  Oddly, it looks rather murky in these photographs but the clouds remained over the Ceredigion hills, and the day remained clear until nightfall.

I walked down to the post office, passing the allotments below Gwelfor Road, where a couple of people were preparing their plots.  I am certain that the slight scent of celery was my imagination, but allotments always make me think fondly of big, healthy vegetables.   I went along the front to Penhelig, just to stretch my legs and enjoy the views.  Before returning home, I indulged in a blissful ice cream.  As I said to the lady in The Sweet Shop, one of these days I really must try something other than salted caramel.  My first one of the season, it seemed to taste particularly creamy, and the salt was wonderfully sharp against the smooth caramel.  Heavenly.

The jetty is closed with barriers at the moment, for reasons undisclosed, so I sat on the wall of the wharf, dangling my legs over the edge, listening to the peace and quiet.  I was amused to see that of the few people wandering around in Aberdovey and sitting on benches in the little park outside the information centre, nearly every one of them was holding an ice cream cone.

I dropped into the butcher on the way back up the hill and left with some enticing goodies, including a sinful sausage roll and two huge leeks.  An altogether satisfying couple of hours, and it was super to be able to throw open doors and windows when I arrived home.  Down on the sea front it was quite breezy, but here on the hill it was perfectly still.  The birds were out in force – goldfinches, blue tits and great tits on the feeders and a male blackbird and a robin making inroads into a bowl of mealworm.  The pheasants had been out in force in the morning, one of the females hopping up the steps and appearing at the kitchen door as usual to demand peanuts.

Bliss that the evenings are getting longer. 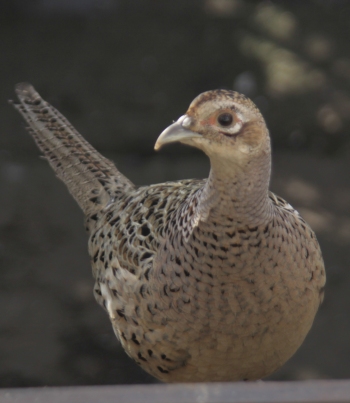