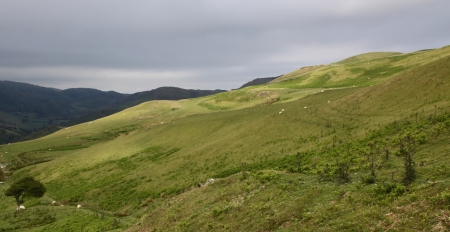 Monday at 4pm was looking dicey.  I started out in a light rain coat, because it was spitting fairly firmly and the sky looked ominous, but thankfully it stopped.  I rolled up my coat and put it in my rucksack, the sun came out, and we had no rain for the rest of the two and a half hour walk.  The combination of sun and cloud in the late afternoon made for some very nice contrasts in the scenery, and the wild flowers were splendid.  The foxgloves, which have been rampant for weeks, have truly come into their own in the hills behind Aberdovey, and were really rather spectacular.  Another terrific walk without another person in sight.  There were a lot of sheep and lambs around, the lambs now fairly stocky.  On the other side of the valley, cattle were grazing on the hillside.  We saw several tiny frogs in a narrow stretch of water where there had been tadpoles earlier in the year, and a couple of rabbits on the return leg of the journey at the top of the hill, and could here the larks singing.  Apart from the glorious views, the main source of interest was the wildflower population.

The foxgloves dotted around in the new green bracken provide lovely splashes of colour at the moment. 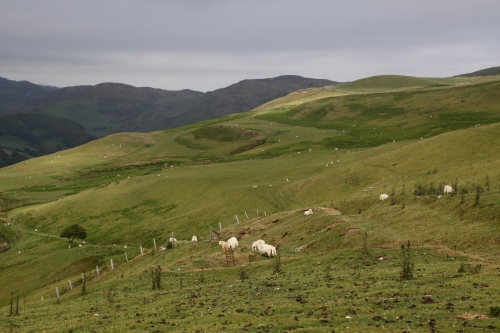 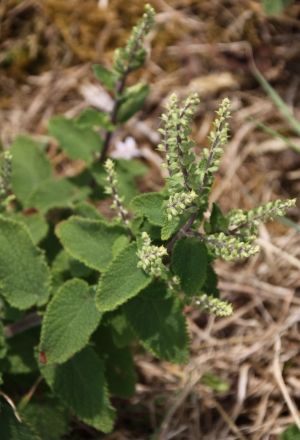 This is not in flower yet, but looks from its leaves and its spikes like wood sage (Teucrium scorodonia).  It should flower between July and September, producing creamy-yellow lipped flowers.  It is a member of the mint family.  It is drought tolerant, and is often found in coastal areas including sand dunes. 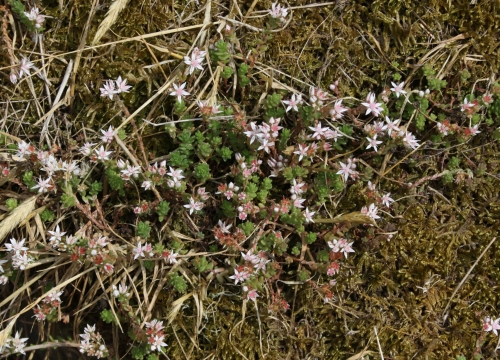 English stonecrop (Sedum anglicum)
A succulent acid-loving 5-petalled perennial, flowering from May to August.  Retaining water in its waxy leaves allows it to tolerate dry environments and poor soil and to survive drought conditions.  The leaves may turn red if it is exposed to a great deal of sun, a protective chemical response to sunlight, which can damage green chlorophyll.  To protect itself from wind-scorch, it grows very low to the ground.

Sheep’s-bit (Jasione montana)
Sometimes called Sheep’s-bit scabious, this is actually a perennial member of the campanula family, even though it has no obvious resemblance to the usual bell-flowered character of campanulaceae and at first glace looks much more like a true scabious.  Unlike scabious, it has small, alternate hairy leaves. and tiny narrow petals.  According to the Wildlife Trusts website, pollinating insects, which see a different light spectrum to humans, find it highly visible under ultraviolet (UV) light, and use the patterns and colours on the petals to guide them to the nectar and pollen.  It usually starts flowering in July, but thanks to the remarkably warm spring, a lot of species are flowering early.  It likes a wide variety of environments, including dry grassland, and is often found in coastal areas.  It is an excellent pollinator. 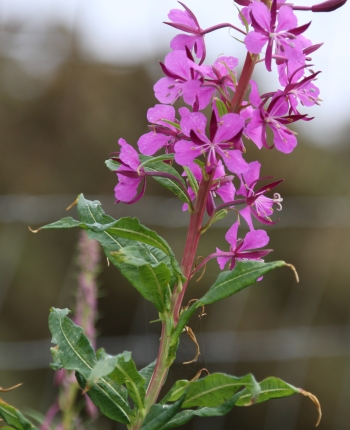 Rosebay willowherb (Chamerion/Epilobium angustifolium).
Also known as “fireweed” because it colonized burned and scorched sites, and “bombweed” due to its expansion on World war I and II bomb sites.  Heat from this type of site assists with the germination process.  It has rhizomes, so a single large patch can be one plant. Its seeds also establish themselves freely, each fitted with cotton-like ‘parachutes’ that carry them over long distances. The Latin “angustifolium” simply means narrow-leaved.  It is a biennial that flowers from June to September.  Its leaves are edible and have a wide range of uses.  For more on the multiple uses, see the Wikipedia page dedicated to Rosebay willowherb.

Self-heal (Prunella vulgaris)
One of my books says that the dark violet flowers have a hooked upper lip that in the 16th century was supposed to look like a sickle, so according to the doctrine of signatures, it was believed to men wounds from sickles and billhooks.  Although there were one or two isolated examples in verges, this perennial has creeping roots and in open grassland and on heaths usually grows in patches from June to November.  The Latin “vulgaris” means common.  They are pollinated by long-tongued bees. 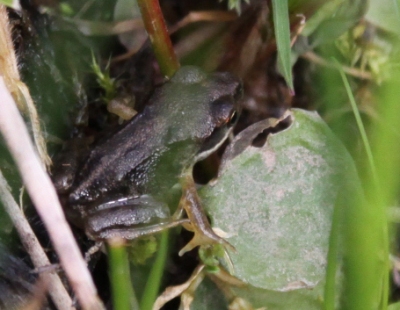 A tiny frog, about 3cm long, in a very small stream where we had seen tadpoles earlier in the year.  There were several of these little amphibians, and they would have been completely invisible if they hadn’t hopped around, their damp skin catching the light.  It’s a lousy photograph, because I was trying to hold back some grass with one hand and steady the camera and focus it with the other, but you can just about make it out.

Marsh Thistle (Cirsium palustre)
Like most thistles, this has spiny protection both around its clusters of flowers and along its stem, and even has spiny leaves.  It looks fairly lethal to unprotected hands and judging by its proliferation, it is a good defense against being eaten by sheep, cattle and rabbits.  It was spread all over the hillsides, and it is easy to identify from a distance due to its distinctive form.  As its name indicates (“palustris” means of marshes), it prefers damp conditions and meadows, but seems to be doing well at the moment, even after the recent drought conditions.  It is biennial, pollinated by bees and butterflies, and usually flowers between July and September.

Occasional white examples of the purple marsh thistle were dotted around.

Foxglove (Digitalis purpurea)
Foxgloves are going mad at the moment, in verges, in amongst the bracken or as here, on disturbed ground.  They began flowering in early May, although they don’t usually appear until June, and flower until September.  The foliage is poisonous, which is probably why in Wales it is known as elves’ fingers or gloves, and in Ireland it is called fairy thimbles.

Bittersweet or woody nightshade (Solanum dulcamara)
All parts of the plant are poisonous but in humans usually cause only upset stomachs.  The latin species name “dulcamara” means sweet-bitter, which describes the bitter taste, followed by a sweet after-taste.  In Germany physicians used it as a cure for rheumatism and it was hung around the necks of cattle to ward off evil.   It flowers from June to September and is happy in hedgerows and woods.  After flowering it produces egg-shaped berries that start off green, as above, and slowly become a bright, shiny red.

This is tiny, just a few millimeters across.  I still haven’t tracked it down but will update this page when I do.

White foxglove (Digitalis)
The hills are covered in the distinctive purple spikes of Digitalis purpurea (“purpurea” means purple) at the moment, so the appearance of a single, pure white foxglove, near the stream in Happy Valley, was something of a novelty.

Afon Dyffryn Gwyn in Happy Valley.  Afon means river, but it’s more like a big stream. Dyffryn means valley, and Gwyn can mean white, fair or blessed.  The water is always beautifully clear.  In the shallow stretches by the ford, where the plunging track meets the valley floor, well-camouflaged fish can be spotted maintaining position in line with the flow, as below.  Most of them were about an inch long, but this one was about four inches. 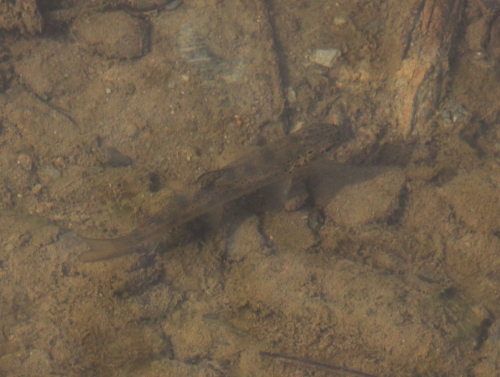 The stream was being visited by cows and their calves, all calling to each other in loud, low, resonating voices.

Honeysuckle (Lonicera periclymenum)
Beautifully-scented, honeysuckle has evolved to attract pollinating moths.  When the flowers go over, clusters of red berries replace them.  They flower from June to October.  This was was growing in a hedge by the side of the road leading up to the Panorama.  Lonicera is named for the German botanist Adam Lontzer (1528 -1586), and periclymenum is the term for honesuckle, derived from Greek.

Dog rose (Rosa canina)
Although similar in appearance to the bramble flower, the distinctive heart-shaped petals of the dog rose make it easily distinguishable.  It climbs through hedges and bushes, lending colour to otherwise unremarkable shrubs.  The white petals are often tinged with pale pink, as in this example.  After flowering a red rosehip is produced, and as well as being eaten by animals and birdds can be used to make rose-hip syrup, which has high quantities of vitamin C, and can be used to produce wine and liqueur.  It flowers from June to July.

The Afon Leri and the 5000 year old Cors Fochno peatland with the hills of Cerdigion rising behind.  A shame about the disfiguring wind farm on the otherwise undisturbed hillsides, but you can’t have everything! 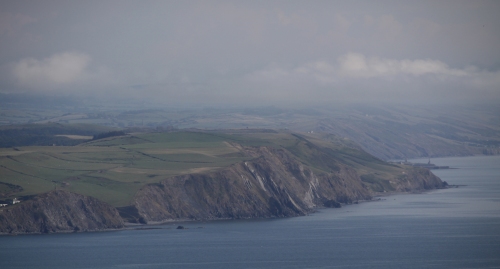 View from the top of the hill across to the cliffs of Ceredigion, looking very beautiful under the gathering clouds

8 thoughts on “A late afternoon stroll in the hills behind Aberdovey, with wildflowers”