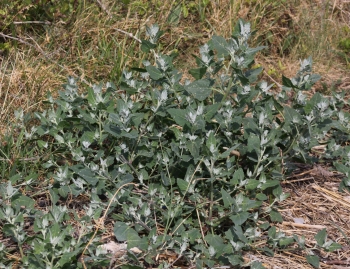 When I finished my Eating Well During Lockdown series, I said I would only post a cooking commentary if it was based on ingredients that were locally grown or produced, and you really cannot get more locally grown than the Aberdovey sand dunes!

A few weeks ago, attracted by a large area covered with lovely Viper’s Bugloss on the edge of the sand dunes, spectacularly on the turn between pink and blue, we spotted a substantial clump of a green plant with distinctively shaped leaves, no flowers.  The leaves were robust and very slightly rubbery to the touch, because they are slightly succulent, and they had a faint shine on the upper surface, dull on the underside.  My friend Caroline thought that it was probably orache (pronounced “orac” or “oratch”), Atriplex patula, and after leafing diligently through a few books, that’s duly what it turned out to be. 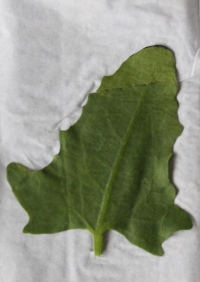 So what is orache?  I had no idea, so a little research was necessary.  The photo above right shows as it is on the edge of the dunes, not particularly prepossessing, but as the photograph of the leaf shows, it is fairly distinctive.  It is an annual member of the Atriplex genus in the Amaranthus family, and is also known as saltbush.  Its leaves are edible and commonly used by foragers.  Edible does not always equate to delicious, but orache turns out to be both.  The salad leaves are only viable when young, because they become too tough, but they become a useful substitute for spinach when they mature.  Because they are succulents, retaining water in their leaves, and they live in a salty habitat, the water within the leaves is also slightly salty.  It’s worth remembering that when seasoning anything that you cook with orache as a component.  The roots are mildly toxic so should be avoided.  Atriplex littoralis looks similar but although it is not poisonous it has an offensive smell and tastes awful, so the two are easily differentiated. 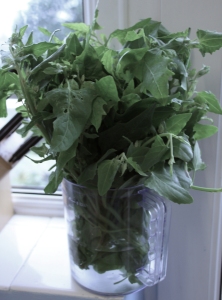 When Caroline produced a glorious bunch of orache, having gone on a foraging expedition, I had a lot of options.  Now fully mature it was a lot greener and a lot larger, but retained its slightly rubber texture.  I immediately put the verdant bunch into a jug of water, to keep it fresh, and started plotting.

Caroline has been treating it both as spinach, wilting it slightly to serve as a vegetable, and using it raw in salads, and I also liked the look of the suggested orache tortilla-pizza on the Wild Food Girl website.  In the end I decided to use half of it for soup, some of it to replace spinach in my frequent mushrooms, dice courgettes, pancetta and spinach on toast, and the last of it to liven up a chicken rendang curry.  So here are three meals that I made with some of the bunch, with many thanks to lovely Caroline both for providing the orache and for expanding my horizons. 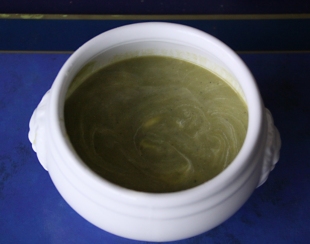 Wednesday’s soup became an orache-and-asparagus-with-a-few-leftovers soup, because I had a pack of six small asparagus tips that were hiding at the back of the fridge and needed using up fairly imminently, but the orache was dominant.  Other odds and ends were an inch of courgette (how, I wonder, does anyone end up with a leftover single inch of courgette?); 2 small Maris Piper spuds, very finely sliced to help it break down quickly; the floppy outer leaves of a little gem lettuce; half a purple onion, roughly sliced; three spring onions, chopped; the edible parts of the tops of two leeks; and some mint.  The main ingredient, by far, was orache.  I put all of it in a saucepan and tossed it to heat through in some butter for between five and 10 minutes, added water to cover, added some chicken stock and simmered it for another 10 minutes.  Once the potato had broken down I lobbed it into the food processor for a few minutes, in two batches.  I then put it back in the pan, re-heated it slightly, stirred in a big dollop of crème fraîche, a big squeeze of lemon juice, heated it through again gently and poured some of it into a soup bowl to serve.  Heavenly!  The orache tastes a bit like something between curly kale and spinach, full of personality, with bags of flavour released by the cooking process. 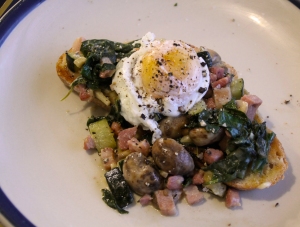 On Thursday I made mushrooms, pancetta, courgettes and orache on toast, with a poached egg on top.  The mushrooms and courgettes are fried in butter until the begin to brown. The finely chopped garlic is added with some fresh thyme, and after these are stirred in, some flour is sprinkled over the top to take up the fat from the pancetta and thicken the liquid.  It is stirred into the mixture until it is invisible, and heated for a few minutes to make sure that the flour is incorporated and cooked through.  At this point, a little water goes in, accompanied by the orache, chopped parsley and a few turns of the pepper mill. I also like to add a slosh of sherry at this stage.  When the orache begins to wilt, some cème fraîche is added and reduced, and when the orache is fully wilted the mix is served on a piece of toast with a poached egg on top.  The basic formula is a favourite, and of course it can be varied endlessly.  In the photograph, the wilted orache can be seen either side of the egg, a very dark green. 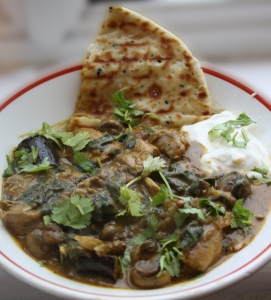 Yesterday, Friday, I was cooking a sort of ersatz chicken rendang curry, but using yogurt instead of the usual coconut (which I detest).  Also added into the mix were aubergine chunks, fresh green chilies and mushrooms.  I left it in the fridge overnight to develop the flavours.  When I slowly reheated it tonight, Saturday, I added a good handful of the last of the orache 10 minutes before the end of the cooking time, when it was simmering very gently.  It was an excellent addition, giving real balance to the rich sauce, with more than enough flavour to stand up for itself against the heat of the chili, and providing some much needed greenery as a contrast to the orange-coloured sauce and the bland solids.  In the photograph, the bright green leaves are coriander, but underneath them, the dark green wilted leaves are orache.  To complete the happy extravaganza I had a piece of garlic and coriander naan bread (not home-made).

Orache is a great plant for cooking if you like curly kale, spinach and similar flavours and textures.  I changed the water in the jug ever day, and it remained super-fresh.  Finally, I chopped and simmered the stalks with some chicken stock, leek and onion to make a well-flavoured thick soupy base for a future soup or stew, and froze it down.  The aromas as it simmered in a covered pan were wonderful.