This can hardly be termed a walk, because the B-road runs around 15ft from the ramparts on an unenclosed section of open hillside overlooking the sea.  I certainly had a good walk on and around it, but it was not a walk in its own right, and I went elsewhere to stretch my legs properly afterwards.  For those of you hoping that the endless posts about hillforts will eventually come to an end – five down, four to go, plus a summary post 🙂   If you are wondering about the sunshine, this was actually on the 17th September, but I have a bit of a backlog at the moment. 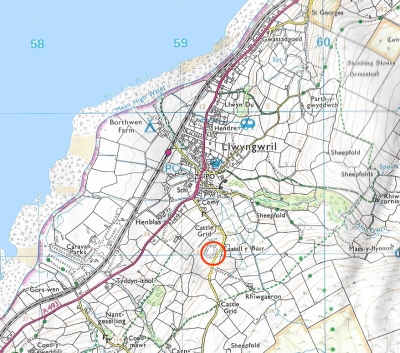 Of all the hillforts in the series so far, this was by far the easiest to access and observe on the ground.

The approach is from the A493 coast road.  As you close on Llywgril from the south, there is a cemetery on the right, just before you reach the village itself, and a tiny, sharp right-hand turn in front of the cemetery.  The hillfort is about 3 minutes up the single-track road (driving slowly).  It is on private land, and there’s no public footpath, there are barriers to entry and the Heneb website states that the owner currently allows access, which is a generous courtesy.  I parked on the verge opposite.  The banks are liberally covered in gorse, but there are plenty of ways into the fort, including the original entrance at the far right as you look at it form the road.  Sheep tracks show that it is regularly visited by the local livestock, and they break through the gorse at a number of locations around the perimeter.

Castell-y-Gaer is quite different from most of the hillforts described so far.  Well preserved, it overlooks the sea but is not on the peak of the hill.  Although it seems high from below, which it is at just above the 120m OD contour line, it only has that drop on its western side.  It is on a slight knoll, very slightly tipped towards the sea to the northwest, a slope dropping fairly steeply away beneath it, running into pasture below.  The land around it on three sides, however, is fairly level and it is overlooked by higher ground on the same hill.  If it was not for the defenses, would present no difficulty to anyone attempting to enter it.

It measures c.60m by 30-44m and gives a sense of good amount of internal space.  The overall shape is sub-rectangular, and although the internal space tips to the northwest, the interior is far more level than any of the previous hillforts visited in the area, and it would not be surprising to find the foundations of structures within it.  Although not obvious at first glance, it does incorporate natural scarps above steep natural slopes on the west and north, but it is particularly notable for its artificial defenses, particularly its stone-faced banks, reaching 6m wide, and deep ditches, with counterscarping (second bank and ditch) to the southeast.  The stone appears to have been quarried from the ditches, and possibly from the hillfort interior.  Even though it is not at the summit of the hill, it is very exposed, and on an averagely breezy day was very windy. 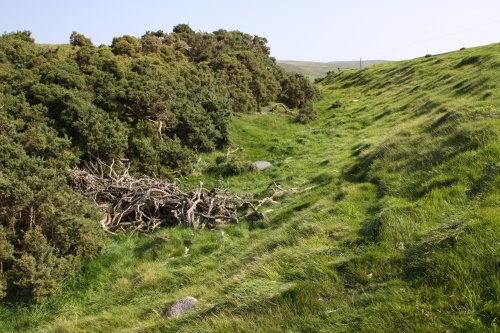 Ditch on the eastern side

Stone-faced rampart to the north 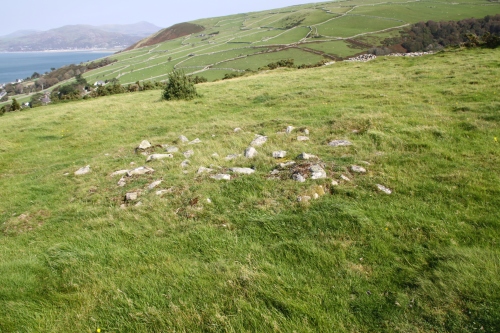 Wider view of the hillfort interior

Ramparts along the eastern side

The defenses have something in common with Craig yr Aderyn, which has similar wide, sloping rock-faced banks, but the entrance is more complex, the interior more open, and the siting completely different.

The entrance is at the northeast corner, facing east.  On the eastern side of the hillfort the northern end of the outer bank overlaps with the southern end of the scarp, forcing the visitor the visitor to walk in facing north, but they are immediately confronted with more earthworks that force them round in a loop to the south, and this gives access to the entrance.  This dog-leg turn would have impeded access if control over entry was required.

The Coflein website says that the interior of the enclosure shows signs of cultivation and that a rectangular enclosure/platform, c.20m square, to the northeast may be connected.  It also records that there are extensive traces of relict fields occur to the west, although it does not comment on dating, although the close association between the fields and the hillfort makes a direct association possible.  The fields are visible on the photograph below,

The Afon Gwril runs down the narrow, shallow valley to the north, but is not a major water course, and it is unknowable if it was a reliable source of water in the Iron Age.  The OS map marks a well/spring immediately to the north.  Again, it is impossible to know if this was present in the Iron Age.

The views are all about the coastline.  As well as the sea immediately to the west, the coastline is clearly visible all the way to Barmouth and the mouth of the Mawddach estuary to the north.  Immediately to the north, the inland view is over a nearby hillside, now a pattern of drystone walls.  The Lleyn Peninsula was visible in the far north as a blue silhouette.  Behind the fort, rising to the east and southeast, is lightly sloping hillside.  This drops fairly steeply to the southwest of the fort in a line with the hillside beneath the fort itself.   The slope flattens gradually towards the sea, and both the hill and the fields below are grazed today by sheep at all levels and cattle on the lower levels.  To the south, pastures look out to the sea. 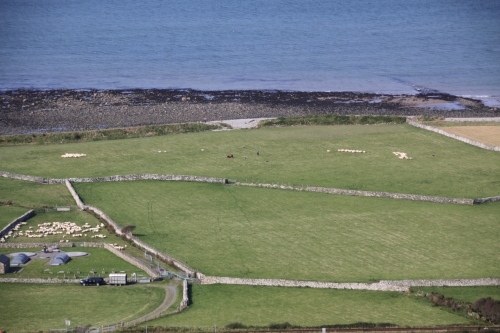 View to the west 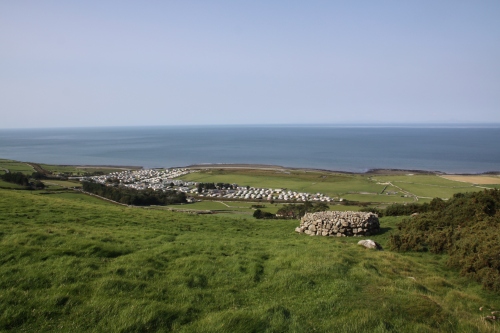 Looking west from outside the southern bank of the hillfort. 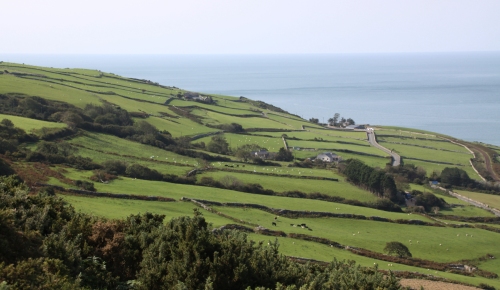 Looking south across the gently sloping pastures to the sea 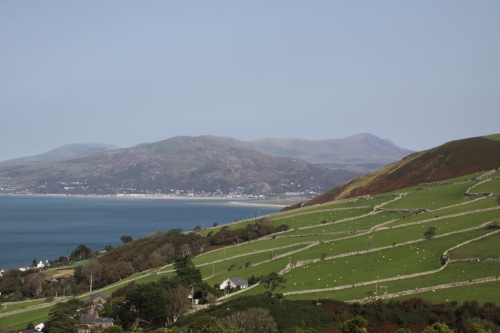 View from the hillfort to the east

View of the hillfort from the east

To the north, the hills behind the Mawddach are visible, at least on a sunny day.  To the west there is just sea. 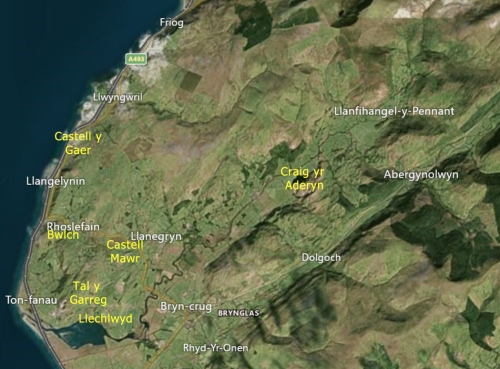 View towards Barmouth, the Mawddach estuary and Dinas Oleu (approximate location marked with a red arrow)

There are no hillforts in sight to the south or east, just the immediate hillside.  The nearest hillfort to the south, also on a hill overlooking the coast but out of line of sight from Castell y Gaer, is Bwlch on Foel Llynfandigaid, which is around 4km away as the crow flies but a range of higher ground stands between them. A perusal of the Ordnance Survey map produced the site of Dinas Oleu, which sits immediately above Barmouth at SH61711578 and turns out to be the remains of an Iron Age hillfort (approachable via a footpath and there are a few details about it on the Coflein website).  The two sites are around 7km apart as the crow flies, and it would require a very clear day or night for any signals to be visible, not always a foregone conclusion in a coastal/estuary location.  The arrow in the above photograph is a guess, based on trying to match up the photograph with the OS map, and should be treated as extremely approximate.  The lack of a line of sight to the sites to the south does not rule out that Castell y Gaer had an important role linking north and south along the coast.

Although I included this as a possible outlier of the Dysynni and Dyfi hillfort group, I suspect that it is probably part of the Mawddach group, although at the moment, not having seen or read about any of the Mawddach hillforts, that’s just a guess.  This does not mean that it would not have been in communication with hillforts to the south, or that it did not have a potentially pivotal role in communication between north and south along the coast, but its main physical orientation to the north, its views to the north and its distinctive architectural features, suggest that it may be part of a slightly different tradition.

Bowen, E.G. and Gresham, C.A. 1967.  History of Merioneth, volume 1.  From the earliest times to the Age of the Native Princes.  The Merioneth Historical and Record Society.