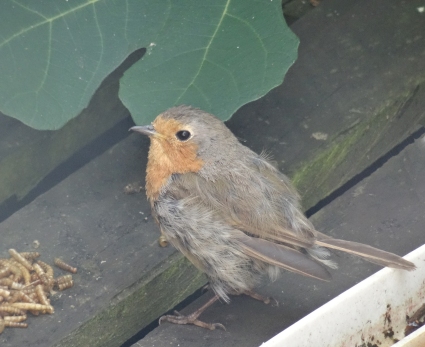 The robin that visits daily, with his plumage in transition.

It was lovely to see the frog the other day, but I have been so disappointed that there were no birds.  Seagulls and crows are around, although not in huge numbers, but there are no small brown jobs.  There were plenty only a month or so ago, including a robin who wouldn’t stay out of the house.  I thought when I raked up the garden cut grass and leaves that that would bring out robins and blackbirds, but not one appeared.  The bird feeder is completely neglected.  I tried putting seed down to lure them in, but nothing appeared.  The BBC provided the answers with a fascinating little article on the Springwatch section of the BBC website.  This informs the reader that birds do vanish at this time of year for a number of reasons, and that they will be back soon:

In spite of that, I have managed to lure a robin onto the decking.  He’s shy, and as I only put down food when I can watch it due to the crows swooping in and consuming whatever they can, it has taken him a while to become confident that I am not going to engage in any swooping of my own.  At first when I appeared with the food he would fly away, but now he simply backs off a little and waits.  He keeps a wary eye on me but he is less nervous every day.  It feels like an achievement, although I am not quite sure why.  A small sparrow has also discovered the feeder, and there is currently a truce in progress but it looks like a somewhat fragile contract.