I went in to the Aberdyfi Literary Institute today to become a member, and picked up a number of leaflets, one of which was entitled “The Story behind the Monument.  Penhelyg Park Aberdyfi.”  There is no author cited so I cannot credit him or her, but it is an excellent account of the history behind the monument. The monument, shown right, reads:

The main thrust of the story is that the Number 10 (Inter-Allied) Commando unit, with its headquarters at Harlech, was made up of a number of volunteer troops, each representing a different European nationality, all dedicated to Allied interests, with each based at a different place in Britain.  Most remarkable of them all, however, was No.3 Troop, which was formed in 1942 and was made up of of German and Austrian nationals, “enemy aliens” as well as others who were either European (mainly Czech and Hungarian) or stateless, mainly Jewish, all of whom had fled the Nazi regime as it began to gain strength.  The members of the troop, once trained, were used for reconnaissance and intelligence gathering, affiliated to other troops either on the front line or behind enemy lines.  The Troop never fought as a unit.  The idea was the inspiration of the Chief of Combined Operations, Earl Mountbatten.   3 Troop came to Aberdovey to be trained.  Whereas other troops were given the name of their nationality (e.g. No.2 Dutch Troop) No.3 was named X Troop by Winston Churchill, the X standing for an unknown quantity, a reflection of how bold the idea was considered to be. 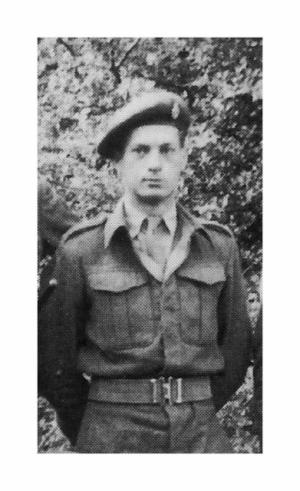 Over 350 refugees volunteered for 3 Troop, of whom 86 were selected in the first intake.  Eventually around 130 men served in 3 Troop 10 (1A).  As well as being completely fluent in German, they had to be capable of achieving the highest Commando skills.  Most were aged between 18 and 25, many had been resident in Britain for some time, and some of them had served in the unarmed Pioneer Corps, which focused mainly on light engineering work.  There was no fanfare accompanying their arrival.  Their role was a secret one.  Each individual had taken a British name as a nommes de guerre and been given an identity backed up by all the necessary documentation.  Only the policeman was informed of the true purpose of the Troop, and they were billeted in private homes and integrated with village society.  Two of 3 Troop married local girls. Initially none of them were eligible to become officers, a restriction that was removed after they had proved themselves, in 1944, after which 18 became officers.  Their Commanding Officer was Bryan Hilton-Jones from Caernarfon who was a graduate in Modern Languages from Cambridge, and rated as a good leader of men.  The leaflet says that he was a fitness fanatic, and saw to it that their training was incredibly wide-ranging, everything from physical aptitude, weapons training and intelligence to housebreaking, lock-picking and demolition.

3 Troop members had been involved in numerous fighting, the invasions of Normandy and Sicily, small raids, and various other campaigns.  Twenty were killed in action and twenty two were wounded or disabled.  An article on the BBC website, which is also well worth a read, lists the honours that were awarded to 3 Troop:  one MC, one MM, one Croix de Guerre, one MBE, one BEM, one Certificate of Commendation and three Mentioned in Despatches. He goes on to say that “the number of awards are derisory considering their exploits and the inevitable death sentence they faced if captured – not to mention the danger to any of their surviving relatives in Nazi Europe. Many details of the men were known to the Gestapo and reprisals would have been immediate.”  This was probably because, fighting as individuals alongside other units, they never fought as a unit and were therefore not in a position to be put forward for honours by their own Commanding Officer.

The monument was installed in 1999, unveiled by the former Lord Lieutenant of Gwynedd, Mr Meuric Reese CBE, in the presence of twenty eight 3 Troop survivors, on 15th May of that year.   It was designed, carved and inscribed by John Neilson letter carver, lettering designer and callipgrapher of Pentrecwn, Oswestry.  With his skill at incorporating letters into works of art, he was the perfect choice for this particular memorial.  For more examples of his work see the Arts Connection / Cyswllt Celf website.

For anyone who would like to read the full version of the leaflet, together with its recommended further reading, there are copies in the Aberdyfi Literary Institute, or you can download the PDF: 3 Troop 10 leaflet entire.

You may also be interested in the transcript of a speech delivered by Colin Anson, formerly Claus Leopold Octavio Ascher, on the 4th September 2007 at the Imperial War Museum.  The speech described his experience as a member of No 10 (IA) Commando 3 troop, given when he attended a reunion of refugees from Nazism who served in the British Forces in WW2. It gives insights into some of the work he carried out as part of 3 Troop.   The transcript is on the Commando Veterans website.

More very useful information about training and deployment of 3 Troop 10 is given in the book Leadership, Management and Command: Rethinking D-Day By K. Grint , the relevant section of which is available on Google Books.

Update, 30th June 2020, from Martin Sugarman , Archivist of The Assocation of Jewish Ex-Servicemen and Women of the UK, AJEX, and the Jewish Military Association (JMA) of the UK

The men of No 3 Troop were all Jewish except 2 and when the Commando Veterans web site gives their background, and omits saying many were Jews, they do not understand that many of the men on enlistment, attested as Christians in case they were captured; it was to protect themselves and their families who they believed were still alive in Europe. so, because their attestation is ‘official’ and ‘carved in stone’ on their military records, the web site writers do not realise that they are quoting wrong information.

It would therefore be appropriate for anyone wishing to offer thanks at the memorial to obtain Star of David British Legion pegs rather than Crosses for placing at the base.

Penhelyg Park with the memorial at the far end