Walking towards Tywyn from Aberdovey you will come across a Second World War pillbox, an ugly concrete box with a small square hole in each side.  It has subsided unevenly into a dip in the beach at the foot of the dunes, an incongruous contributor to the area’s heritage.  It can be reached easily along the beach from Aberdovey.  It’s a fairly short walk from the car park, a little way beyond the Trefeddian Hotel, which is visible through a dip in the sand dunes.  If you prefer a short-cut there is a public footpath from a big lay-by on the A493 that takes you across the sand dunes and drops you very close to it.  Not that it’s a tourist destination, but it is certainly a local landmark, and sitting in an unspoiled stretch of eternal pale yellow sands with the rich blue sea beyond, it has an emphatic presence all of its own.  It is at grid reference SN59549635, at the end of the footpath known as The Crossing.

The pillbox is marked as a red box by The Crossing. Source: OS Explorer, Cadair Idris and Llyn Tegid. OL23. Ordnance Survey 2015

There are two war memorials in Aberdovey.  There’s a lovely 1999 memorial to 3 Troop 10(1A) who were stationed at Aberdovey during the war for their training (see my earlier post about this) and there’s a little shrine and plaque listing the dead from form both wards inserted into the wall of St Peter’s Church.

In some ways, the pillbox is an even more substantial monument to the bitter truth of war, mute but evocative.   The fact that it sits there, so out of place, so thoroughly ugly, is an appropriate shock to the system.  As detritus of war, it is something that demands a response and forces an  acknowledgement of the realities of the past in a way that a conventional memorial, however heartfelt, does not.  Although it was a lovely day for a walk, the sands endlessly beautiful and full of light, when I arrived at the pillbox it was just as dismal as I remembered.  Ugly, lop-sided, surreal, a scar on the landscape, a slap around the face.  A savage, palpable war memorial.

Pillboxes were part of a network of small defences that were put in place along the coastline, at road junctions and on canals to counter threats of Nazi attack on Britain.  The network consisted of a number of measures including offshore minefields; beach and manned seafront obstacles like barbed wire and landing craft obstructions, pillboxes and minefields; and cliff-top and dune defences including pillboxes and anti-glider obstructions.  The pillboxes, 28,000 of them, were sometimes round or hexagonal to avoid blind spots, but there were were seven different types in total (Types 22-28), with variants.  The Aberdovey one is a Type 26 prefabricated square with an embrasure in each wall and a door, now slightly subsided into a slight dip in the sand, 3ft or so deep.  Some pillboxes were brick- or stone-built but many, like this one, were made of concrete that was sufficiently thick to be bullet proof.   My thanks to the Pillbox Study Group for this excerpt, which explains the thinking behind pillboxes and other defence structures that were put in place in WWII:

On 25th June 1940, General Paget, Chief of Staff to the Commander-in-Chief Home Forces submitted General Ironside`s anti-invasion plan to the War Cabinet in the form of Home Forces Operation Instruction No.3.

SECTION 13 of the Instruction stated: “The general plan of defence is a combination of mobile columns and static defences by means of strong-points and stops. As static defence only provides limited protection of the most vulnerable points, it must be supplemented by the action of mobile columns. However mobile such columns may be they cannot be expected to operate immediately over the whole area in which it is possible for the enemy to attempt invasion by sea or air. It is therefore necessary to adopt measures for confining his actions until such time as mobile columns can arrive to deal with him. This will be done by means of stops and strong-points prepared for all round defence at aerodromes which are necessary to prevent the enemy obtaining air superiority, at the main centres of communications and distributed in depth over a wide area covering London and the centres of production and supply. This system of stops and strong-points will prevent the enemy from running riot and tearing the guts out of the country as had happened in France and Belgium.”

In total there were 6 pillboxes every 500m from south of the river Dyffryn Gwyn, which flows into the sea just south of Tywyn, to the entrance of the river Dovey.  Prefabricated pillboxes were built of concrete panels and were then bolted into place on site.  The pillboxes to the north of this one are badly damaged, perhaps in an attempt to destroy and remove them.  Aberdovey had an Observer Corps, a Home Guard and a Coastguard Station during the Second World War. 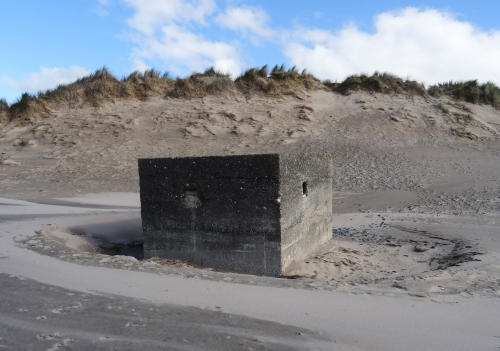