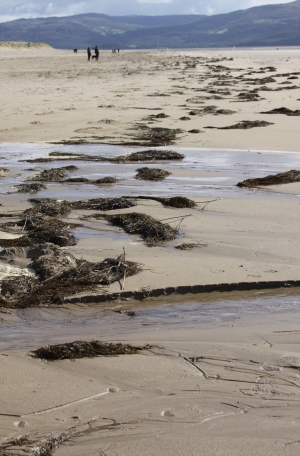 When is a potato not a potato?  When it’s a sea potato.  When I moved here eight weeks ago I bought a book (a lot of the best bits in my life start with the phrase “I bought a book”) about beachcombing and the strandline (also referred to as the wrackline or driftline).  The strandline is that trail of debris that marks where the tide last deposited its load.  In London I lived a three minute walk from the Thames in a section of the river that had been used from the 17th Century until the mid 19th Century for shipbuilding.  A favourite walk at low tide (there is a 7m difference between the Thames at low and high tide) it was a rich source of objects, telling a partial and fragmented story about how the foreshore had been used and what the river carried and dropped on its travels.  But at Aberdovey, apart from collecting the occasional shell or decorative pebble, I had never paid much notice of what was at my feet at on the beach.  I was too busy enjoying the dune vegetation, the rolling waves and the gorgeous views.   At Aberdovey my invariable habit has always been to walk one way along the top of the sand dunes and then back along the water’s edge, fastidiously avoiding those dark, unappealing fly-covered lumps of festering decay.  Today, however, they were my goal, and to my amazement they were a wonderful treasure trove.

Common otter shell (Lutraria lutraria), 12cm long, which burrows to depths of up to 30cm.

I had been feeling almost housebound due to the gales and the torrential rain brought by Storm Bronagh.  I am glad that the weather front was provided with a name, as it gave me something specific to have a real grumble about.  On Sunday, however, I woke up to glorious sunshine and immediately decided to abandon all the outdoor DIY and gardening that I ought to be getting on with and head for the beach.  There was a lot of wind and big patches of fluffy white cloud, but mainly big blue skies and a beautiful autumn sun the colour of electrum.   I threw my cameras, spare batteries and a lightweight waterproof into my ruck sack, mainly to block the wind, hauled on my fiendishly ugly hiking trainers and checked the tide tables – low tide at 3pm, hallelujah.  I took the car in case the weather turned and I needed a rapid escape from rain, parked opposite the fish and chip shop and set out optimistically for my first lump of black gunge.

The strandline is primarily made up of seaweed, which is at the heart of the local marine ecology.  What washes up with the tide is what grows in the vicinity and tells you something about what’s going on out there, and it is home to a wide range of creatures.  When it washes up on the seashore it also acts as a host to other forms of life, including insects and birds.  Seaweed is an algae and an autotroph, meaning that it makes its own food from sunlight, carbon and water.  Unlike plants, seaweed does not have roots, absorbing water through its leaves instead.  Photosynthesis, the which captures energy from the sun, is achieved via pigments, chemical compounds.  Green seaweeds contain mainly or entirely chlorophyll, whilst brown and red seaweeds contain other pigments as well.  Although all seaweeds require water, most spend a significant amount of time out of the water during low tides.  Seaweeds generally attach themselves to rocks or the seabed and stay attached via a “holdfast,” a clump at the base of the plant and can pulled free either due to storms or when they die.  I could only identify around half of the seaweeds from my books because in the general chaos of the standline masses, it was very difficult to pick them out.  There were miles of long, black spaghetti-like weeds that could have been either one of two species, but I couldn’t work out which from the photographs.

Embedded in the seaweed itself or simply sharing the strandline are all sorts of interesting ecofacts, as well as man-made objects.  Shells dominate at Aberdovey, with cockle shells littered everywhere, and some clam shells, including a dense patch of razor shell clams, quite a few oyster shells, some mussell shells and bits of crab claw and carapace.  Drift wood was conspicuous, as well as fresh wood and branches presumably thrown into the river and estuary by the storm.  One of the seaweeds turned out not to be seaweed at all, but is in fact an invertebrate called Hornwrack.  Another find that surprised me was the sea potato, of which I had never heard before.  There were remarkably few man-made intrusions.  There were some bits of nylon rope and a giant piece of “high pressure gas pipeline,” according to the label, but other than that there was none of the plastic that has plagued beaches around the country. 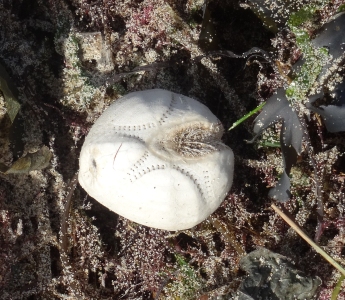 The sea potato (Echinocardium cordatum) was a curious thing.  It was clearly an exoskeleton and at first I thought it was a sea urchin, but on closer inspection, it clearly wasn’t quite the same thing.  I brought one home with me, and it was incredibly fragile, the shell immensely thin a piece breaking off almost immediately when I tried, very gently, to wash it.  One of the several that I photographed appeared to have spines attached, and when I delved into my books it turns out that Echinocardium cordatum does indeed have spines, but unlike those on sea urchins, these lie flat, facing backwards on the surface of the shell (called a test) and look like coarse fur.  Like other echinoderms (spiky skinned) the patterning on its surface is divisible by five (called pentameral symmetry).  Also known as a heart urchin, it lives buried in the seabed, into which it burrows and use tube feet to pass food to their mouths. Apparently they are quite common. 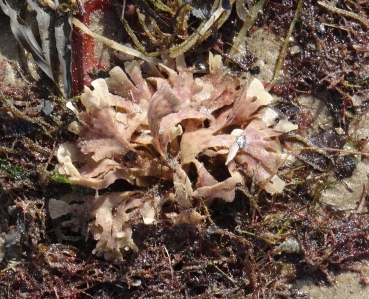 Hornwrack s not a seaweed, but an invertebrate (an animal without a backbone) colony

Hornwrack (Flustra foliacea) is not a seaweed, although the word “wrack” in its name might imply that it is.  It is actually an invertebrate (an animal without a backbone) colony belonging to the bryozoan group, commonly known as moss animals.  It looks just like a seaweed.  It is a common strandline find, each frond an exoskeleton containing  tiny boxes which contain an individual animal called a zooid, making up a colony of inter-dependent creatures.  Annual growth lines can sometimes be seen on the fronds, because it stops growing in winter.  It lives offshore attached to shells and stones, filters food particles, and has a slight lemony scent when fresh and wet.  Utterly fascinating.

Laver, as anyone who lives in Wales will know, is an edible seaweed that tastes delicious in all sorts of things.  There are five related species, the principal one of which is Porphyra umbilicalis, a purple-coloured weed.  A traditional Welsh recipe involves using oats to make laverbread (cooked laver) into cakes.  Before you head out to collect it, do be aware that it requires cooking for eight hours before it is usable!  Easier to buy it in tins from most of the food stores in Aberdovey, including the butcher (who, incidentally, makes the most terrific pork and laverbread sausages).

The second most common type of seaweed on the beach was the wrack (Fucus), of which there are multiple varieties.  Channelled wrack is shown near the top of the page, the picture here is bladder wrack.There was also serrated wrack and spiral wrack on the beach.   When I was a child, the air bladders used to fascinate me, and they are used by the seaweed for helping it to stand vertically in the water to improve its chances of reaching sunlight for photosynthesis.  Bladder wrack has small air bladders arranged in pairs.  Egg wrack has single large ones arranged in a row along each frond.  Channelled wrack has a curled frond  that forms a channel to retain moisture.  Serrated wrack has no air bladders at all.

Seaweeds are generally classed by colour, and there are several green ones listed in books, but I only found one on the strandline, which was gutweed (Ulva intestinalis).  It was spread across a piece of driftwood, absolutely lurid against the wood and against an otherwise muted backdrop of weed and sand.  It likes estuaries and brackish water, but was a bit off the beaten track where I found it, which was beyond the estuary and on a part of the beach that overlooks open sea.  It consists of thin hollow tubes which, when it is alive, are filled with oxygen.  It is edible and said to be delicious.  It is lying against a bed of either Mermaid Tresses or Thongweek, which was the most common of the seaweeds that had washed up on the strandline in clumps.

Sea oak (Halidrys siliquosa), also known as pod weed for obvious reasons, is another common seaside seaweed, which has mutiple branches and rather flattened swollen bladders at the tips of its fronds.  The bladders have internal divisions that are clearly visible. 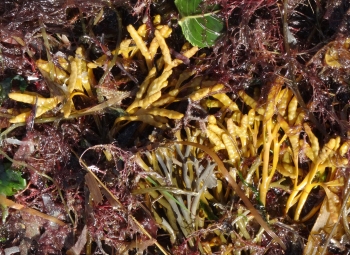 Razor clams were dotted around the beach, but at one point on the beach it was a positive graveyard with dozens of them concentrated in a small area.  As far as I could tell they were all of the same type, the straight edged bivalve (double shell) pod razor clam, Enis siliqua, with an outer coating called a periostracum.  They live buried, aligned vertically, in the sand of the seabed and feed by extending a tube (siphon) above the sand into the sea to extract nutrients.  When the tide is out they burrow into the saturated sand, and retreat further in response to vibration.  As they borrow they eject water, which leaves a keyhole shape on the surface.  I ate rather a lot of them when on holiday in the Algarve, Portugal, and they are delicious. 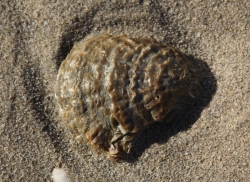 The common or native oyster (Ostrea edulis) is scattered across the beach in the form of single shells.  The photo here shows the typical concentric scaly ridges on the outside of the shell, which is thick. Oysters were a mainstay of the diet in the 18th and early 19th Centuries, cheap nutrition, but were over-harvested during the late 19th Century, when prices went through the roof, and are still seriously depleted and now considered to be a delicacy.  The most common strandline finds have grey shells with blue bands, but grey and brown ones are also found, and at Aberdovey the majority I found on Sunday were brown.

There were a couple of seagulls, but the only other feathered friend I shared the beach with was a beautiful pied wagtail (Motacilla alba yarrellii), his tail flicking up and down in the characteristic way that gave it its name.  Like me, he was beachcombing, but for rather different ends, foraging for small molluscs, insects (particularly the flies that settle on the decaying seaweeds) and seeds.  They don’t look like natural seashore foragers, but are sometimes called the water wagtail because of their affinity to streams and open water, and they are always on the beach in Aberdovey in the autumn and winter, hopping from one promising site to the next.  He kept a wary eye on me and as I moved nearer he flew a little further on, always at the absolute limit of the range of my camera lens, meaning that the photo is very fuzzy.