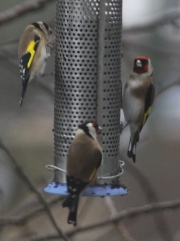 Goldfinches on the nyjer bird feeder

Aberdovey’s Housebird Central has been a busy place in the New Year. I returned from Christmas in Chester to an absolute hive of avian activity. As well as the usual array of blue tits, coal tits, sparrows, the noisy pheasants, and a new small LBJ (Little Brown Job) that needed identification (a very pretty dunnock), a new community of birds had found the nyjer/niger (Guizotia abyssinica) seeds. I had been about to take the bird feeder down, because it really is the ugliest bird feeder of all time and was always ignored by every bird that visited the garden in favour of the mixed seed, mealworm and peanut feeders.  The chaffinches and bullfinches that it was supposed to attract duly arrived but have been feeding happily on the mixed seed feeder.   It has, however, been transformed by a small army of goldfinches from an eyesore into a thing of wonder.  It’s difficult to count how many goldfinches there are, because there are so many, but there are never more than four on the feeder at a time, and that means that there is the occasional mad and multicoloured flurry of feathers as new arrivals displace incumbents. Unlike the blue tits, which are endlessly shifting gymnasts, the goldfinches fix themselves in one position and eat with small, minimalist movements, staying in one place for as long as they remain undisturbed. With beautiful red, yellow, black and white plumage they are remarkably exotic on a chilly grey January morning. Many goldfinch communities migrate as far south as Spain in the winter, so I am lucky that members of this particular colony have remained to face a Welsh winter.

The blue tits and coal tits are as enchanting as usual, and are having a major peanut fest at the moment:

Don’t forget that the RSPB’s Big Garden Birdwatch is taking place between 26th and 28th January this year (2019), now in its 40th year. You can find out more on the RSPB website here: https://www.rspb.org.uk/get-involved/activities/birdwatch/everything-you-need-to-know-about-big-garden-birdwatch/

Pheasant at the bird bath