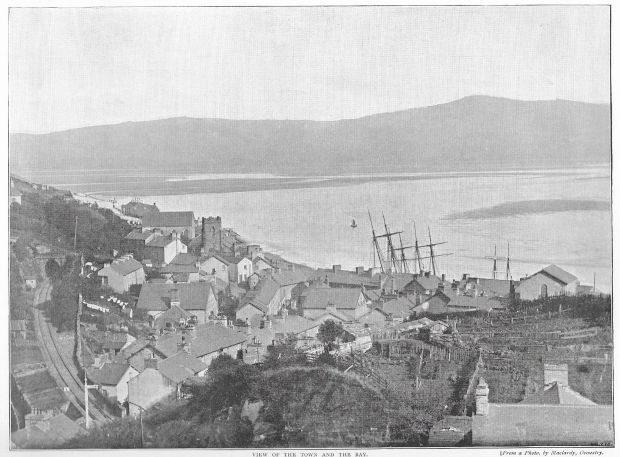 Aberdovey 1895, from the book Round The Coast

On my previous post I mentioned that as well as postcards, I had bought a page with a photograph of Aberdovey that comes from a book dating to 1895, so here it is.  Welcome to page 133 of the book Round the Coast – An Album of Pictures from Photographs of the Chief Seaside Places of Interest in Great Britain and Ireland published in 1895 by George Newnes Ltd (no author credited).  The photograph must predate the publication by several years, as the tiny chapel at the far right of the photograph was replaced in 1894 by a large school.

There is an awful lot to love in both the cover of the book and the photograph itself, which must been taken from the hill behind Copper Hill Street, but what makes it stand out for me is the array of masts that rise above the buildings on the seafront.  There are seven in total, and I desperately wish that it was possible see what they were attached to!

The Aberdovey leg of the Cambrian railway was 31 years old at this time.  Don’t miss the beautiful semaphore signal at the bottom left corner of the photograph.  Although it was generally agreed that the coming of the railway would offer huge benefits to the economy of the village, the exact route was a subject of considerable disagreement between the representatives of the railway company on the one hand and Aberdovey residents and the owners of the land (the Ynynsymaengwyn Estate in Tywyn) on the other.  The railway company planned to run the railway along the sea front, which would have been shorter and cheaper than the route eventually agreed upon.  Aberdovey business leaders and villagers argued that this would have a negative impact on shipping, ship building and tourism, and their determination lead to the track being routed around the back of the village, an expensive compromise that required tunnelling through rock and contributed to the bankruptcy of the major investor.  Read more about the establishment of the railway in Aberdovey in 1864 on an earlier post.

Fanning out below the photographer’s feet are what appear to be gardens or allotments, one of Britain’s happier social institutions.  Behind the railway and running all the way to the tracks are more gardens or allotments.  Any space that didn’t have a building seems to have been highly valued for cultivation.  Surprisingly, given the value of land for housing, there are still allotments in Aberdovey today, running to the south of Gwelfor Road.

Aberdovey’s remarkable religious mix is amply represented.  St Peter’s Church (built 1842) dominates the village from this angle, partly because it is so out of keeping with the surrounding architectural styles.  The Calvinist Methodist Tabernacl (1864) at its side was built on a rise, and replaced the earlier and smaller Wesleyan Methodist chapel in Chapel Square at the foot of Copper Hill Street.  The deliberate juxtaposition of the chapel with the pre-existing Anglican church, the two biggest religious structures in the village, really tells its own story but I wish I could have heard the ecclesiastical debate and the the village gossip as the new chapel went up.  I bet that there were a lot of ruffled feathers.  Three other chapels are also clearly identifiable.  At the foot of Copper Hill Street in Chapel Square are the Calvinist Methodist chapel (1828, now Dovey Marine) and the Wesleyan Methodist chapel (1868), and at the far right of the photograph on the seafront is another chapel that no longer stands.  In a postcard that I have from the early 20th Century this chapel has been expanded and became quite substantial.  I have no information about it so if anyone can tell me anything about it, I would be grateful.

The caption says that at low tide it was possible to walk across to Borth from Aberdovey.  Is that true?  I have seen some seriously low tides, but nothing to suggest that one could ever walk from one side of the estuary to the other.

The caption is a really lovely piece of text that should be enjoyed, and here it is: 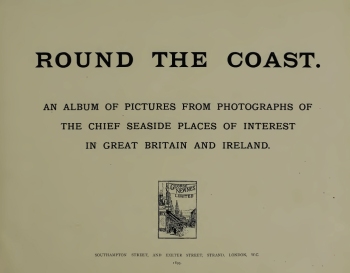 Aberdovey – This lovely resort takes its name from its unrivalled position at the mouth (in Welsh, “Aber”) of the River Dovey. It is a delightfully situated port and watering-place on Cardigan Bay. The chief attractions are its firm sands, which extend for five or six miles, and the mild and equable climate, which rivals that of Torquay or Bournemouth. Aberdovey faces the west, and the air is so balmy, yet invigorating, that the tender myrtle will grow out of doors all the year round. In the season, pleasure boats are in great demand among visitors for sailing and rowing on the estuary of the Dovey, which affords one of the most convenient and safe places in Wales for boating. This is because the beach from the harbour to Penhelig Point – a distance of over half a mile – enables one to land at all states of the tide. At low water, by the way, Borth may be reached across the sands. Charming walks abound in the neighbourhood, the Happy Valley being the most frequented; and we have no hesitation in saying that this particular spot is matchless for beauty, even in picturesque Wales. The ever-enterprising Cambrian Railways Company brings many other delightful excursions within the reach of visitors making Aberdovey their head-quarters; and the company has spent a considerable amount of money in providing harbour and pier accommodation for all kinds of vessels. We hold no special brief for the Cambrian Railways, but we can confidently recommend the lovely places on their system to the notice of those who contemplate a new departure in the way of holiday-making, and who are desirous of sojourning cheaply and well in the very heart of the most beautiful scenery in the United Kingdom.

I cannot argue with any of that.  On the reverse side, page 134. is a photograph of Freshwater Bay on the Isle of Wight, with a similar caption.