The Calvinistic Methodist Chapel (or Tabernacle) in Chapel Square, now occupied by Dovey Marine, has had a rich history, as did the Calvinistic Methodists who built it.   The chapel was their first dedicated premises, before which they used a number of temporary meeting places around the village, their lives made somewhat difficult by anti-Methodist persecution from the important Corbet landowners of Ynysymaengwyn (just outside Tywyn) who owned most of Aberdovey in the 18th Century.

Having arrived in the Aberdovey area in around 1790, it took the Calvinists nearly 30 years to a built a chapel, a significant accomplishment.  They were the first denomination to build a chapel in Aberdovey, although the Wesleyan Methodists were only a year behind them. It isn’t the prettiest or most impressive of the chapels in the village, but the Aberdovey Calvinistic Methodists have a very interesting history.

The Calvinistic Methodists were a mainly Welsh movement that built on the 18th Century revivals of 17th Century Protestantism.  Calvinistic Methodism sounds like a bit of an oxymoron.  Methodism, or Wesleyan Methodism, began at Oxford University, where Charles Wesley (1707-88) and George Whitefield (1714-1770) formed a group to discuss religious ideas and methods, particularly the power of evangelism.  It was joined by Charles’s brother John Wesley (1703-91) and became known as the Holy Group, and later, based on the importance of procedures and methods in their approach, Methodists.  The three, all of whom were ordained, went to America in 1738 to  become missionaries, but George Whitefield returned a year later to focus on doing religious work in England, preaching extensively indoors and out, making himself very unpopular with the established church.  John Wesley returned three years after his departure to America to bring his ideas into the Church of England in an attempt at Anglican reform.  Like Whitefield, he found himself unpopular with the Anglican authorities and was denied preaching  access to some churches, so followed Whitefield’s example and began preaching out of doors, and began to travel extensively.  Wesley and Whitefield parted ways in 1741 over Whitefield’s  belief in Calvinist predestination, foreshadowing the later split between the Welsh Calvinistic and Wesleyan Methodists.  It was only after John Wesley’s death in 1791 that Methodism withdrew from the Church of England and became a doctrine in its own right.  The key difference was that John Wesley retained the Arminian (as opposed to the Calvinistic) belief that salvation is available to all.  In Wesleyan Methodism, the living of a good, altruistic, and selfless lives and absolute belief in and dedication to God is not a means of winning salvation but is actually a product of salvation.  Salvation is therefore by God’s grace alone, rather than something that can be achieved by human endeavour.  This is one of the core differences between Methodism and the Church of England.  In Wales a group of Welsh reformers had very similar ideas 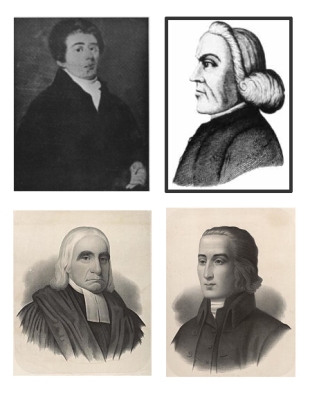 The reform movement in Wales is thought to have begun in Carmarthenshire with Griffith Jones, the rector of Llanddowror, who was responsible for establishing circulating schools in 1731.  These schools taught the Welsh to read by studying the Bible and other Christian scripture.  Griffith Jones became something of a legend and an inspiration to other influential early preachers, like Howell Harris (1714-1773), Daniel Rowland (1730-1790) and William Williams Pantycelyn (1717-1791), all of whom had experienced spiritual awakening and became evangelists for a reformed church that had a high level of evangelism and an emphasis on hard work, moral behaviour and education of the poor.  William Williams became famous for his hymns, song and prayer being important in the religious practices of Calvinistic Methodism.

When the two groups met up they had so much in common that they initially joined forces under the heading of Methodism.  They shared belief in the burden of sin, the need for personal knowledge of God and the ability to feel him, assurance of salvation, recognition when or if sins have been forgiven and the knowledge that this had been felt.  They also believed that rebirth on Earth in the form of a better way of living life was fundamental.  There was, however, a fundamental point of doctrine on which the two branches differed.  Whereas Wesleyan Methodists believed that all people could be redeemed by faith, spreading the word of God and good deeds, the Welsh preachers followed Calvin, the radical French Protestant, who believed that the original sin of Adam made it impossible for people to redeem themselves, and only those who had been selected by God before Christ was sent to redeem them, the elect, would be raised to Heaven.  Because they still retained many of the other Methodist ideas about doctrine and felt just as strongly as the Methodists about the way in which religions should be practised, disseminated and organized, the Calvin followers separated from the Wesleyans and became Calvinistic Methodists.

Calvinistic Methodists put enormous emphasis on itinerant preaching, either indoors or in the open, considered song and active prayer to be important to developing a personal relationship with God, and believed that God would arise and display his glory. Hard work was a core component of their religion because only by hard work and business success could the elect be known and recognize themselves.   By 1750 there were over 400 gatherings of converts who became groups or fellowships known as “seiadau.”

Hugh M. Lewis describes Aberdovey as suffering “a certain amount of religious deprivation” prior to the last decade of the 18th Century.  The main centre of social and economic activity in the area was Tywyn, where St Cadfan’s Anglican Church, dating back to the 14th Century, was the main centre of religious life.  Even itinerant nonconformist preachers who were very active in other parts of Meirionnydd did not reach Aberdovey.   In about 1790, however, a group of Calvinistic Methodists established themselves about a mile outside Aberdovey at a building called Hen Felin, which has since become a ruin.  They next moved to lodgings in a building that belonged to the Raven Arms called The Store House on Sea View Terrace, which was used as a warehouse facility and had an upper room that could be used for Calvinistic meetings.  Unfortunately, Edward Corbet who “feared them as radicals if not revolutionaries” (Lloyd, A Real Little Seaport) was informed of their activities and evicted them, throwing all their property including benches and bibles out onto the road.  The Calvinists were lucky to find a sympathizer in Mr Scott, the owner of the row of three cottages now known as Penhelig lodge, who from 1796 gave them the use of an outbuilding called Ty Coch on the edge of the ravine where there is now a road called Nantiesyn, in Penhelig.  In 1811 the Calvinist Methodist movement established its (Yr Hen Gorff – The Old Body) formally, detached itself from the Anglican Church, and became the leading nonconformist Meiryonnydd religion, giving the Aberdovey preachers a solid foundation. 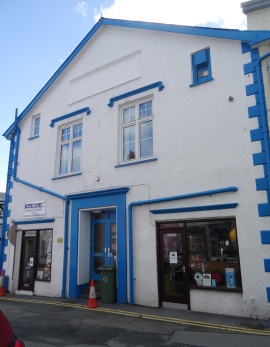 Aberdovey’s population increased in the late years of the 18th Century and the early years of the 19th Century.The discovery of copper and lead in the mid-18th Century and the importance of the port for handling imports of wheat, barley and corn significant contributors to the growth the the village. As Aberdovey prospered, the Calvinist congregation also grew, making it necessary to look for premises that was not owned by the Ynysmaengwyn estate.  In 1827, recognizing the growth of Aberdovey, the Turnpike Trust finished a road that linked Aberdovey with Machynlleth, raising its importance, and increasing the number of visitors.

In 1828 a plot of land in what is now Chapel Square was acquired on a 99 year lease, and volunteers built their chapel to seat 124 worshippers in 1828, at a cost of £400.00 (c. £27,120.52 in today’s money, or 26 horses/74 cows, according to the National Archive’s Currency Convertor website).  It did so well that in 1855 a gallery was added at a cost of £120.00 (c.£8,136.16). The Coflein website says that the new chapel, which they named Tabernacle, was designed by Reverend Richard Humphreys of Dyffryn.   The façades are characterized by large rectangular windows beneath dripstones (mouldings to shelter windows from dripping water), a line of three on the first floor on the Copper Hill Street (front) side and two on the ground floor and two on the first floor at the New Street (rear) side.  The arched Copper Hill Street doorway is lined with stone blocks and a keystone.  The New Street entrance door has a stucco frame.  Stuccoed quoins (masonry corner blocks) are on all four corners of the building and there are wide recessed strips in the gables of both frontages.  A plaque reads: “Tabernacl/adeiladwyd ir Methodistiaid Calfinaidd yn y flwyddin 1828” (Tabernacle / built by Calvinistic Methodists in the year 1828).  Once they had established their chapel the Calvinist Methodists set up a Sunday school. 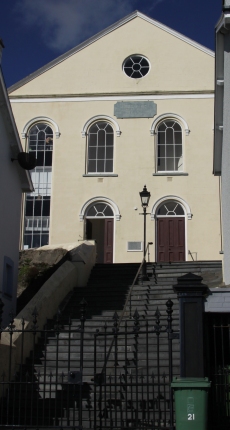 In 1864 the Calvinists left the building in favour of new, much larger premises on Sea View Terrace, also called Tabernacl, which will be covered on future post shortly.  The original 1828 building was immediately adopted as a temporary school whilst a new school was being built.  When it was again vacated the former chapel was renamed the Assembly Rooms and became a resource for villagers and a central location for village activities.  Shops were later established on the ground floor, the first floor was used for meeting space, and the building became know as the Market Hall.  In 1920 it was renamed the Imperial Hall.  In 1931 Roman Catholics, who had no premises of their own in the village, used one of the meeting rooms.  During the Second World War the building became the headquarters for the Home Guard.  Today, the has been occupied for over two decades by the excellent Dovey Marine.

Main sources:
Welsh Calvinist Methodism is usefully described on the Welsh Religious Buildings website.  Wesleyan Methodism and some of the features that distinguish it from Calvinistic Methodism are described in straight forward terms on the Welsh Religious Buildings website and on the BBC Religion web pages.  Hugh M. Lewis, local resident and collector of Aberdovey information and images, is the source of most of the information in this post about the early activities of the Aberdovey Calvinistic Methodists, telling the fascinating story of the establishment of the chapel in his book Aberdyfi, Portrait of a Village (his best book, in my opinion).  Lewis Lloyd’s A Real Little Seaport was also useful, and Hugh M. Lewis’s Aberdyfi, Pages of Time added some additional information.