Thanks very much to the Visit Aberdovey Facebook page for posting this photograph of Aberdovey in the final years of sail.  It is in the National Library of Wales archives, where it is listed as “The landing stage, Aberdyfi.” It is thought to date to about 1885 and was taken by Ceredigion-born John Thomas (1838-1905). 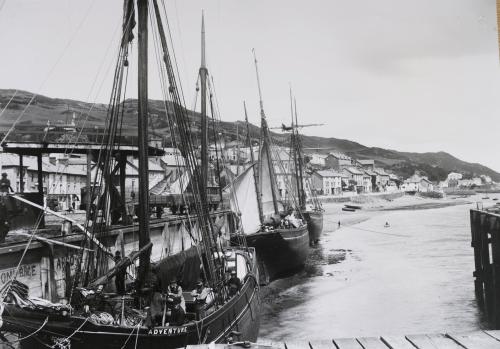 The schooner nearest to the camera is called Adventure.  She is not mentioned in Lewis Lloyd’s book so she was probably not built at Aberdovey but, like the Ellen Beatrice, discussed on a previous post, was probably a coaster that visited various ports on the Welsh coast.  The Crew List website lists over 40 vessels named Adventure between 1857 and 1940, but none of those clustering around the mid to late 19th Century seem to fit the bill.  I’ll continue to look into it, and update the post when I have more information.

All three vessels are beached on the sand at low tide.  If you click on the image to enlarge it and look behind the ships and you can see the rails that ran along the wharf, with some trucks in situ, with a man sitting on one at far left of the shot, and a linkage between the truck and Adventure.   There is a mobile gantry next to the trucks, which would have been shifted along the tracks to assist with the loading and unloading of ships.  I haven’t seen the gantry in other photographs.  Beyond the trucks are what appear to be sails drying.  On the whole, this wonderful photograph poses more questions than it answers.

The People’s Collection Wales website has the following details about Thomas: 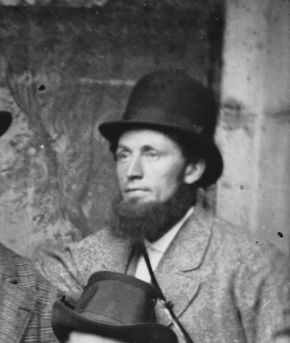 Born in Cellan, Ceredigion in 1838, John Thomas was the son of labourer David Thomas and his wife Jane. Following his education in Cellan, first as a pupil and then a pupil-teacher, Thomas began an apprenticeship at a tailor shop in Lampeter. In 1853 he moved to Liverpool to work in a draper but was forced to leave after ten years to find work in the open air due to ill health. It was due to this that he began work as a traveller for a firm dealing in writing materials and photographs of famous people. Small photographs of celebrities, known as ‘carte-de-visite’ photographs, were extremely popular at that time and made for a very lucrative business.

But, during his travels, John Thomas noticed that there was a lack of photographs of Welsh celebrities. This was inspiration enough for a new business and so, having learnt the rudiments of photography, he began taking photographs of famous Welsh people. He began by asking well-known preachers to sit for their portraits.

His venture was a success and in 1867 he established his own photographic business, The Cambrian Gallery. Travelling the length and breadth of Wales, he photographed celebrities, ‘characters’, chapels, churches, homes and buildings and landscapes, though he remained based in Liverpool throughout his career. Undertaking photography of this style, and on such a scale, was not an easy task. Photographic techniques remained rudimentary for the purposes of external photography, and travel was not easy at this time.  Despite this, John Thomas succeeded in capturing individuals, landscapes and buildings in every corner of Wales during his thirty-year career. The worth of his vast collection was great. He realised its importance and chose some 3,000 glass plates which he sold to O. M. Edwards for a very reasonable price. Thomas had worked for O. M. for many years, supplying him with images for the magazine Cymru and his images would continue to illustrate the magazine even after his retirement.

John Thomas died in October 1905. The negatives bought by O. M. Edwards now form part of the photographic collection of The National Library of Wales and are an important contribution to People’s Collection Wales.

Truly fascinating.  Later this year I hope to post more of his photographs of Aberdovey here, with accompanying information when I can find it.