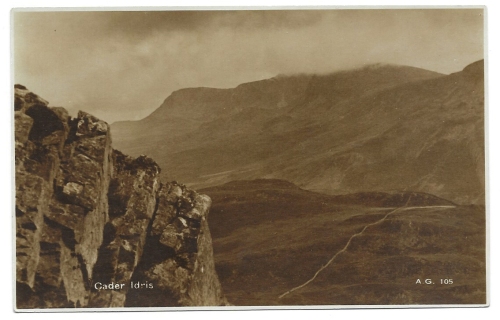 Cadair Idris, the Chair of Idris, the local giant, is a dominant feature of the area.  I’ve walked to the summit a number of times on the Minffordd Path, but that was many years ago and I’ve no idea where those photographs are now.  When spring arrives it will certainly be time to do it again.  The first photograph (Valentine’s AG105), which is unused, superbly captures the solid mass of Cadair Idris, its massive presence.  The sharp outcrop in the foreground is both a great piece of photographic composition and a reminder of the enormous geological forces that lifted up the Welsh hill ranges.  Below it, a well-used track carves a route well into the distance. 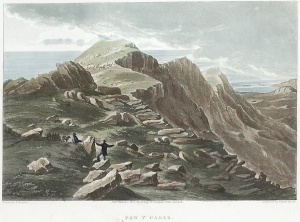 Cadair Idris was a popular destination from at least the late 1700s, when tourists were first attracted to Llyn Cau, the glacial cwym lake.  Llyn Cau has attracted tourists ever since, and it became a popular destination throughout the 19th Century.  Richard Wilson painted Llyn Cau in the late 1700s, and early 19th Century artists continued to produce various interpretations of Cadair Idris, including Edward Pugh (1816), John Skinner Prout (1830), Samuel Jackson (1833) and Sidney Richard Percy (1874).  A painting by Compton is shown here on the left, and some other examples can be seen on the Campaign for National Parks website.  A few brave souls reached the summit, like Thomas Compton who painted it in the early 19th Century.  At 2927 feet the summit and highest point of of Cadair Idris is called Pen Y Caer.

What is remarkable about the summit postcard to the right is that the women reached the summit in those long skirts!  What a nightmare, even if they took one of the easier routes.   All were sensibly armed with sticks, but their footwear is hidden from sight.  They look as though they are heading out for a shoot.  That photograph (Valentine’s 32025), was postmarked1918.  The message on the back, sent to Derby, says that the writer hopes to climb it one night!  The mind boggles, quite frankly.