When I first moved to Aberdovey I bought myself two books about what sort of things I could expect to find on the strandline of the beach.  My previous strandline discoveries have been posted here and here.  My books almost promised me that I would find mermaid’s purse of some description on the strandline, but until yesterday I hadn’t seen one.  Yesterday, attached to a bit of bladder wrack seaweed, not far from a nice example of an Echinocardium cordatum (see the end of the post) I found a battered but fairly in tact example of a mermaid’s purse or, more mundanely but more accurately, an eggcase, which turns out to be one of nature’s minor miracles: 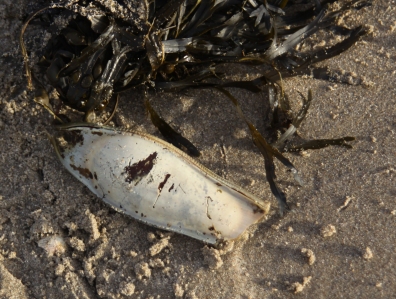 An eggcase is the product of fish of the elasmobranch species – shark, ray and skate, which instead of having bony frames have skeletons made of flexible cartilage, and many lay eggs in pouches or eggcases.  The eggcases are made of collagen, a resilient protein found in vertebrate animal tissues. Some have curly tendrils at one end to attach them to the seabed and seaweeds.  Within the eggcase is a yolk that provides nutrition for the embryo.  As it grows, the embryo wriggles and this pushes stale water out of the hollow horns of the eggcase and pumps in fresh oxygenated water.  When the embryo has reached full size, it swims out of the eggcase, abandoning the empty pouch, a perfectly formed miniature version of its adult parent. 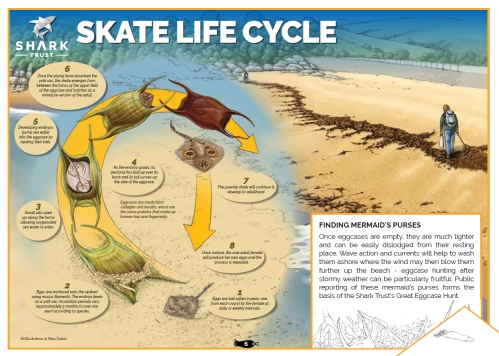 In the example that I found, the seaweed to which it was attached had worked its way free and washed up on the strandline, with the eggcase firmly attached.  It took me a few moments to unravel it.   When they are washed up on the shore, they lose their flexibility, shrivel and become hard, but not brittle, and they can survive for many years. 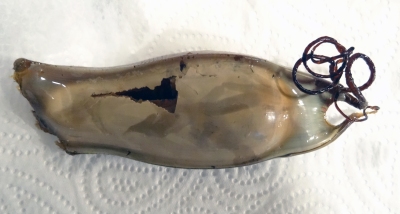 I brought the eggcase home and dried it out on a piece of kitchen roll on the radiator before looking it up. This was the wrong thing to do.  According to one of my books (the absolutely excellent The Essential Guide to Beachcombing and the Strandline by Steve Trewhella and Julie Hatcher), what I should have done is soak it in water to rehydrate it so that I could compare it with photographs on the eggcase identification page on fabulous The Shark Trust website, where you can also record your finding.  The Shark Trust has an ongoing Great Eggcase Hunt, which began in 2003, and has now logged over 100,000 eggcases on British shores.  It has identified ten species of skate and three species of shark, and is beginning to get an idea of where favoured egg laying places are located.

So it was back to the drawing board, by which I mean a saucepan of water.   After the eggcase had soaked overnight I had another poke at, prior to any attempt at identification, and it was just as solid as it had been when it went into the saucepan.  I assume that baking it on the radiator had rendered it immutable.  Checking the solid item against various photographs in books and on The Shark Trust website it was immediately clear that eggcases are either black or a translucent pale gold, information that appeared to narrow things down significantly. Although mine is light in colour, big patches of black suggest that it was originally black all over.  The shape is clearly either Nursehound (or Bull Huss) or Smallspotted catshark, but the smallspotted catshark eggshells are translucent and golden and only reach a maximum of 7cm in length, and mine is 12cm, not counting the tendrils, and 4.5cm wide at its widest.  So even though the colour is debatable, I concluded that mine was probably a Nursehound/huss, which is a common specie in this area (and I bought quite a lot of huss from Dai’s Shed during the summer) but I’ve submitted my guess with photographs so that The Shark Trust people can make their own judgement. 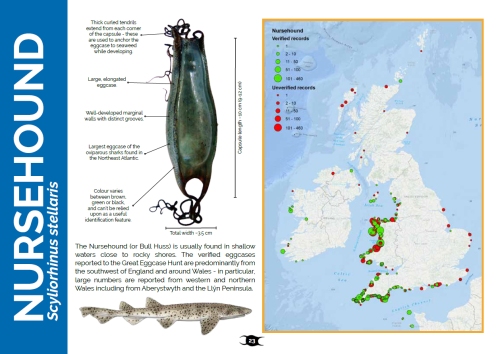 Another nice find was an Echinocardium cordatum.  They are not uncommon on the Aberdovey beach, which astounds me as they are so fragile that you are in danger of them shattering as soon as you pick one up.  Also known as sea potato and heart urchin, they are covered with spines that, unlike the more familiar sea urchins, lie flat against their shells (“tests”) and look a bit like an animal pelt.  Also unlike sea urchins, they live burrowed under the sand of the seabed.