The little Congregational chapel opposite the Snowdonia Tourist Information Centre on Glandyfi Terrace is a bijou little place, quite one of my favourite buildings in Aberdovey.

The Congregationalists (or Independents) arrived in Aberdovey in 1839, and found premises at 6 Evans Terrace where the minister preached their first sermon on 9th March 1840.  From there they moved to 50 Copperhill Street, and where there until 1845 until they established a small chapel called Capel Bach (Low Chapel) on the slopes of Pen y Bryn, the small hill with the folly on top, near today’s Prospect Place.

By the 1870s Aberdovey was becoming prosperous, and in 1882, two years after the chapel opened, the new wharf and jetty were built, improving transport links between sea and the decade-old Cambrian railway for the import of timber, livestock and unprocessed grain and the export of slate and milled grain.  As Aberdovey became more affluent, new people took up residence, both Welsh and English, and their spiritual needs were catered for by a remarkable number of chapels for such a small community.  The chapel was built in the late 1870s, and opened in 1880 to seat a congregation of 250 worshippers.

The chapel has a steeple with its own entrance, an octagonal spire, Gothic Revival clerestory windows, and a large pointed arch window that dominates the stone-dressed façade, featuring attractive traceries with four quatrefoils and stained glass.  The Gwyneth Archaeological Trust states that the unrendered stone is from Penrhyndeudraeth, probably from the Garth quarry in Minffordd, which opened in 1870 and is still in use. the stone dressings and quoins are of Anglesey limestone.  The slender painted iron columns in the interior are absolutely in proportion to the rest of the building, and a very distinctive feature.  The first service was held in the new chapel in 1880, when the village’s first harmonium was introduced.  A few years later the village’s first pipe organ was installed.   The welshchapels.org website indicates that a major renovation took place in 1905, at the cost of £1950.00.  It closed in 1998, when it was purchased and converted for residential use in 1999 by the present owner (with my sincere thanks to him for showing me around the absolutely super interior).

The choice of architectural design is interesting because far more than the other Aberdovey chapels, it borrows directly from the Catholic and Anglican paradigms of church architecture.  A photograph of it in the late 19th Century in Pages of Time by Hugh M. Lewis shows it with the surviving boundary walls and rails and two gateways opening directly onto the road with a gas light opposite, with no pavements (see above).  St Peter’s Anglican Church is clearly visible further down the road.

Congregationalism dates back to the 16th and 17th Centuries. The Congregationalists, together with the Baptists, are two of the oldest Nonconformist religions, and Geraint Evans credits the Congregationalists with being the “seedbed of Welsh Protestant Dissent” in Llanfaches, established in November 1639.  It was given a major boost during the Evangelical Revival of the 19th Century, and in 1832 the Congregational Church of England and Wales was established, a national organization of independent Congregational churches.  Many Congregationalists agree on a number of doctrines, which may include the principle of sola scriptura (the idea that all knowledge required for a spiritual life and to achieve salvation is contained in scripture) and that adult conversion to the faith is a requirement for spiritual salvation.  They all reject the episcopal concept of Holy Orders that are conferred by a religious leader (usually a bishop), adopting professional clergy and an active laity instead.  Finally, Congregationalist churches and chapels are independent of other doctrines, and are self-governing.

The above photograph, this time from another booklet by Hugh M. Lewis, Aberdyfi: A Glimpse of the Past, shows the village in about 1900, with the chapel at the far end, giving a good impression of the stretch of road from the corner of Copper Hill Street down as far as the chapel.   Fishing nets are out to dry in the foreground, and there is a two-masted ship moored against the jetty, and the architecture along that stretch of road preserves many of the terraces from the 17th Century village.

Looking around for anything similar in the area with a view to trying to identify who the architect of Aberdovey’s Congregational Chapel might have been, I stumbled across the larger Capel Tegid at Bala, a Calvinist Methodist church (reconsecrated as a Presbyterian church in the 1930s) that has a lot in common with the Aberdovey chapel, including painted iron columns.  I have no idea if it was built by the same architect, but it is not entirely implausible that William Henry Spaull of Oswestry, who built Capel Tegid and a number of Wesleyan Methodist chapels in  Wales, was also responsible for the Aberdovey Congregationalist chapel.

The 1999 conversion of the Aberdovey Congregationalist Chapel to residential use by a Welsh citizen was absolutely in tune with the existing architecture, retaining all the key features including the wonderful slender painted cast iron columns and the stained glass windows, and all the furnishings complement the original features beautifully.  It is beautifully maintained, inside and out, and is a credit to its owner.  The perfectly manicured hedge in front of the chapel is evergreen myrtle, the leaves of which have a wonderful aromatic scent when rubbed, and it produces a plethora of tiny white flowers in the summer. 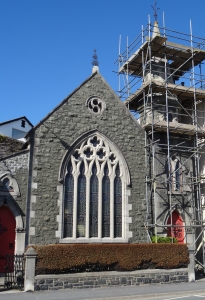 I won’t mention the owner’s name, to preserve his privacy, but when I first moved into the area I had not realized that it had been converted and thought that it was still either in use as a chapel or was empty.  When I saw someone emerging from the building I therefore had no hesitation in asking if it would be possible to see around it at some stage.  He was so kind that he invited me in there and then.  I was expecting dusty recesses and cobwebs, and instead stepped through the door to find that I had invited myself into what was clearly someone’s very beautiful home!  To say that I was mortified barely touches the surface.  But I am so glad that I made that particular mistake, because it was super to see how stunning it is.

Some restoration work was carried out to the steeple in 2018.

It should be noted that although the Coflein website has a photograph of the Congregational Chapel under its entry for the English Presbyterian Church of Wales, this is a case of mistaken identity.  The Presbyterian chapel is the yellow building at the opposite end of the village (and shown in this blog’s header).   Elsewhere on the site, the Coflein website has the chapel listed as an Independent chapel (nebo), the Welsh-speaking term for Congregationalism.  The Coflein website lists many photographic records of the interior prior to its conversion in its catalogue, but these are not currently available online.